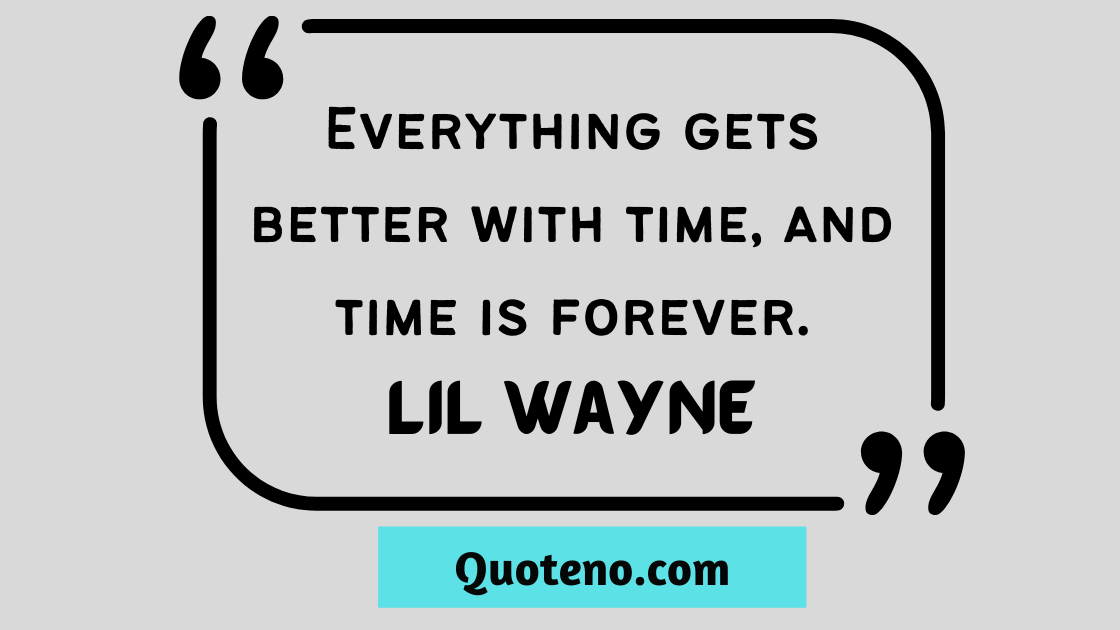 Lil Wayne Quotes and sayings with images. If you are a fan of Lil Wayne then these famous Lil Wayne quotes are for you.

He was born on September 27, 1982. His name is Dwayne Michael Carter Jr but professionally known as Lil Wayne is an American singer, actor, rapper, entrepreneur, and songwriter.

He is one of the richest rappers in the world and his net worth is estimated to be 150 million dollars. He is regarded by many fellows as one of the most powerful hip-hop artists of his generation and is often cited as the greatest rapper of all time.

“Everything gets better with time, and time is forever.”

“Throw dirt on my name, and I still come out clean.”

“I tried to pay attention, but attention paid me.”

“Prepared for the worst, but still praying for the best.”

“Mind so sharp, I fuck around and cut my head off.”

“I am probably in the sky, flying with the fish, or maybe in the ocean, swimming with the pigeons. See, my world is different.”

“Yeah, my life is a bitch, but you know nothing about her.

Been to hell and back, I can show you vouchers”

“Confidence is the stain they can’t wipe off.”

“Just remember that when nobody else was there for you I was.

And when nobody else gave a damn I did.”

“I don’t want to be understood because if people understand me, they get tired of me.”

“Trying to tear down the past prohibits you from building up your future.”

“God can judge me, I don’t need a jury. Nothing standing in my way, like nothing’s my security.”

“I’m blessed and I thank God every day for everything that happens for me.”

“Man in the mirror, my hero

Then he sees me take off my sheep clothes”

“Never come in second, make the most of your seconds.”

“I’m a lion redeemed, inspired by the green. Never tired or fatigued, never defiant to my team.”

“I hope I leave more of an impression on my kids. To be destined to have blessings to believe in, Lord.”

“Hate is only a form of love that hasn’t found a way to express itself logically.”

“I’m blessed and I thank God every day for everything that happens for me.”

“Jail didn’t make me find God, He’s always been there. They can lock me up, but my spirit and my love can never be confined to prison walls.”

“I’m an addict, I’m addicted to success. Thankfully, there’s no rehab for success.”

“I like people that enjoy life, ’cause I do the same.”

“I don’t think life is about a pace, living slow or fast, and think you just live.”

“Trying to tear down the past prohibits you from building up your future.”

“My life is like a movie and I do my own stunts.”

“Mirror on the wall, through my rise and fall, you’ve been my only friend.”

“If you’re enjoying these quotes, you’ll love our collection of mirror quotes that will change your perception.”

“I got these haters, like “when will he stop? Maybe a minute after never, so set your clocks.”

“I don’t think life is about a pace, living slow or fast. I think you just live, y’know what I mean?.”

“Somewhere along the way in your life, the world and its people will have a problem with you. That’s their problem. Not yours.”

“I feel like everything I do is successful and productive. It’s gonna be hard to tell me I’m slipping.” – Lil Wayne’s lyrics

“The more time you spend contemplating what you should have done… you lose valuable time planning what you can and will do.” – Lil Wayne

“What goes around comes around like a hool-a-hoop.” – Lil Wayne

“I’m a lion on redeem, inspired by the green. Never tired nor fatigued, never defiant to my team.” – Lil Wayne

“Where I come from, the block becomes your daddy.” – Lil Wayne

“Don’t judge me. You wanna judge me, put on a black gown and get a gavel.” — Lil Wayne

“Don’t judge me. You wanna judge me, put on a black gown and get a gavel.” — Lil Wayne

“One thing about a skater: they never quit. So a skater, to sum it up, is awesome.” – Lil Wayne

Everybody know, I don’t do no promoting. I don’t ever have to promote nothing, that’s the beauty of Lil Wayne.

“The most bizarre thing I’ve ever read about myself is that I was dead. That was kind of weird to read that I’m dead – mostly because I was reading it.” – Lil Wayne

“My aim is just to make good music every single time.” – Lil Wayne

“If I have a rap album I’m dropping, then I want it to be the best rap album.” – Lil Wayne

“I was still in school after I dropped my first solo album.” – Lil Wayne

“Honestly, I don’t listen to nobody else’s music but my own. It’s kind of like sports to me. You don’t see Kobe Bryant at a LeBron James game – he just works on his own game. And that’s what I do. I only listen to me, so I can criticize and analyze and all those things.” – Lil Wayne

“Just remember that when nobody else was there for you I was.

And when nobody else gave a damn I did.”

“I listen to her heartbeat cause it plays my favorite song.” – Lil Wayne

“Hate is only a form love that hasn’t found a way to express itself logically.” – Lil Wayne

“I’m on the road to riches, it’s just lil traffic.”

On the dark side of the moon.” – Lil Wayne

I hope you like these quotes by Lil Wayne. Share your favorite quote in the comment section below and share it with your friends, family members, and on social media.
Read also: charlie Chaplin quotes