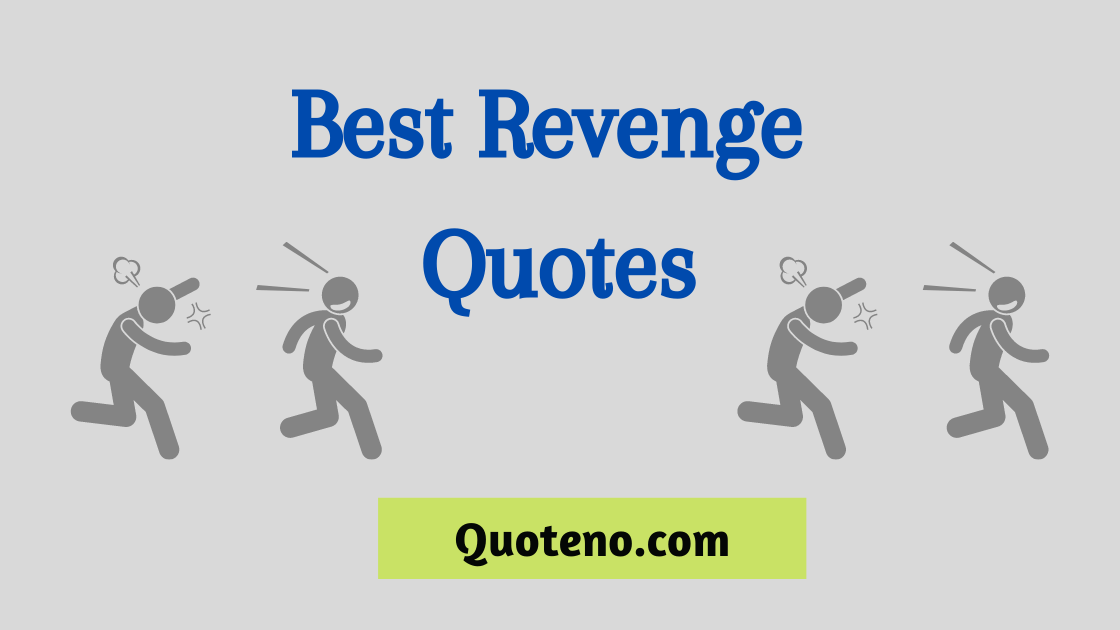 Famous revenge quotes and sayings for haters and enemies with images. Here are the best quotes related to revenge for your enemies and haters from famous people available on the internet that will inspire you.

Revenge arises when people have been upset or annoyed by an individual and as a result, now they have the desire to return them back. People have different opinions on revenge some may believe it’s ok to retaliate some don’t.

Human beings can be motivated to take revenge on others for different reasons. These reasons may vary. If you also think about revenge then think again twice before making a decision. If you are in anger and will explode soon. Think before you do something that is not able to be undone and you feel regret later on.

Revenge will make your life more unhappy. I hope these wise quotes about revenge will help you to clear your mind and calm yourself. Share these quotes on revenge with your friends, family members, and on social media.

“Life being what it is, one dreams of revenge.” Paul Gauguin

“Revenge is a confession of pain.” — Latin Proverb

“If you lose a big fight, it will worry you all of your life. It will plague you until you get your revenge.” – Muhammad Ali

“Revenge is a kind of wild justice, which the more man’s nature runs to, the more ought law to weed it out.” – Francis Bacon

“Revenge is never the best driver for a battle, but a common one.” – Janet Morris

“The energy spent trying to get revenge can be better spent creating an amazing life. Forget about them. Remember you.” – Thema Davis

“The best revenge is to live on and prove yourself.” – Eddie Vedder

“Revenge is a kind of wild justice, which the more a man’s nature runs to, the more ought law to weed it out.” – Francis Bacon

“There is nothing wrong with revenge. The wrong has already been done, or there would be no need to even the score.” – Ashly Lorenzana

“The old law about an eye for an eye leaves everybody blind.” – Martin Luther King Jr.

“The soul of mercy is better than a soul that is revengeful.” – Angelina Elise

“Revenge has its own special taste.” – Unknown

“It was all about wanting to get revenge. Pathetic, really, but it still is the motivation.”– Julian Clary

“We learn our lessons and get hurt so want revenge. Then we realize that actually, happiness and forgiving people is the best revenge.” – Madonna

“Revenge can only be found on the road to self-destruction.” – Wayne Gerard Trotman

“Revenge… is like a rolling stone, which, when a man hath forced up a hill, will return upon him with a greater violence, and break those bones whose sinews gave it motion.” — Jeremy Taylor

“Not forgiving is like drinking rat poison and then waiting for the rat to die.”—Anne Lamott

“I’ve learned that from a war ignited by revenge, nothing can be born, but sorrow. – Aladdin” ― Shinobu Ohtaka

“The paradox of vengefulness is that it makes men dependent upon those who have harmed them, believing that their release from pain will come only when their tormentors suffer.” – Laura Hillenbrand

“The nearer I approached your habitation, the more deeply did I feel the spirit of revenge enkindled in my heart.” – Mary Wollstonecraft Shelley

“Oh, God,” said Monte Cristo, “your vengeance may sometimes be slow in coming, but I think that then it is all the more complete.” – Alexander Dumas

“To take revenge halfheartedly is to court disaster; either condemn or crown your hatred.” Pierre Corneille

“I don’t have time, energy, or interest in hating the haters; I’m too busy loving the lovers.” ― Steve Maraboli

“The only thing more frustrating than slanderers is those foolish enough to listen to them.” ― Criss Jami

“Stop this madness before it starts, revenge will only cause you to regret.” -Freddy Johnson

“It’s only revenge and the worst of it all, it all comes back to you.”-Randy Fredrix

“Revenge will only fill your heart with hate.” -Tony Austin

“It is impossible to suffer without making someone pay for it; every complaint already contains revenge.” Friedrich Nietzsche

“Revenge, lust, ambition, pride, and self-will are too often exalted as the gods of man’s idolatry; while holiness, peace, contentment, and humility are viewed as unworthy of serious thought.” Charles Spurgeon

“The greatest form of retaliation is not loving your enemy but ignoring them.”― Bonga Lee

“Revenge itself may indeed be the best revenge, but slaying one’s enemy does not give back what they stole.”― Emilie Autumn

“When you begin a journey of revenge, start by digging two graves: one for your enemy, and one for yourself.” – Jodi Picoult

“Revenge is barren of itself: it is the dreadful food it feeds on; its delight is murder, and its end is despair.” –Friedrich Schiller

“If you spend your time hoping someone will suffer the consequences for what they did to your heart, then you’re allowing them to hurt you a second time in your mind.” ― Shannon L. Alder

“God is a mean-spirited, pugnacious bully bent on revenge against His children for failing to live up to his impossible standards.” ― Walt Whitman

“Hello. My name is Inigo Montoya. You killed my father. Prepare to die!” – William Goldman

The way of revenge lies simply in forcing one’s way into a place and being cut down. There is no shame in this. By thinking you must complete the job you will run out of time.” – Yamamoto Tsunetomo

Vengeance and retribution require a long time; it is the rule. – Charles Dickens- “A Tale of Two Cities”

“Could all be lies? Could all be part of revenge scheme, planned during his decade behind bars. But if true, then what? […] Never mind. Answers soon. Nothing is insoluble.” – Alan Moore

“The alternate domination of one faction over another, sharpened by the spirit of revenge, natural to party dissension, which in different ages and countries has perpetrated the most horrid enormities, is itself a frightful despotism.”

Revenge Quotes For Her / Him

“Anger doesn’t make things easier. Tears don’t bring back what has been gone. That’s why a smile is always the best revenge.”

“Never get jealous when you see your ex with someone else because our parents taught us to give our used toys to the less fortunate.”

“Kill them with success and bury them with a smile.”

“Show him what he’s missing. Make him regret what he’s left.”

“Sometimes the best revenge is to smile and move on.”

“The best revenge is just moving on and getting over it. Don’t give someone the satisfaction of watching you suffer.”

“The best revenge is to show them that your life is much better after they’re gone.”– Nishan Panwar

“I won’t block you or delete you. I’m keeping you there so you will be able to see how happy I am without you.”

“Always stay gracious, the best revenge is your paper.” – Beyonce

“Funny thing about revenge. It could make a killer out of a nun.” – Kevis Hendrickson

Revenge Quotes For Whatsapp To Inspire You

“The best revenge is to be unlike him who performed the injury.” – Marcus Aurelius

“Revenge is weak when provocation is the reason to prepare us strong for any battle.”― Alan Maicon

“I’m a fighter. I believe in the eye-for-an-eye business. I’m no cheek turner. I got no respect for a man who won’t hit back. You kill my dog, you better hide your cat.” — Muhammad Ali

“An eye for an eye will only make the whole world blind.” ― Mahatma Gandhi

“Revenge is often like biting a dog because the dog bit you.” – AUSTIN O’MALLEY

“Revenge is the act of passion, vengeance is an act of justice.” – Samuel Johnson

“If only, revenge had the power to bring peace.”― Shweta Grewal

“In a nutshell, revenge cannot reverse the loss.”― Marina Cantacuzino

“For the Christian, revenge is a dish best not served at all.”― Todd Stocker

“Revenge is always the weak pleasure of a little and narrow mind.” – Juvena

“However miserable you make us, we shall still have the revenge of thinking that your cruelty arises from your greater misery.”― Emily Brontë

when you enjoy your life. you face different kinds of people many of them try to stop you or hurt you and say negative things about you. it is part of human nature and we can not change it. ignore these people and move on.