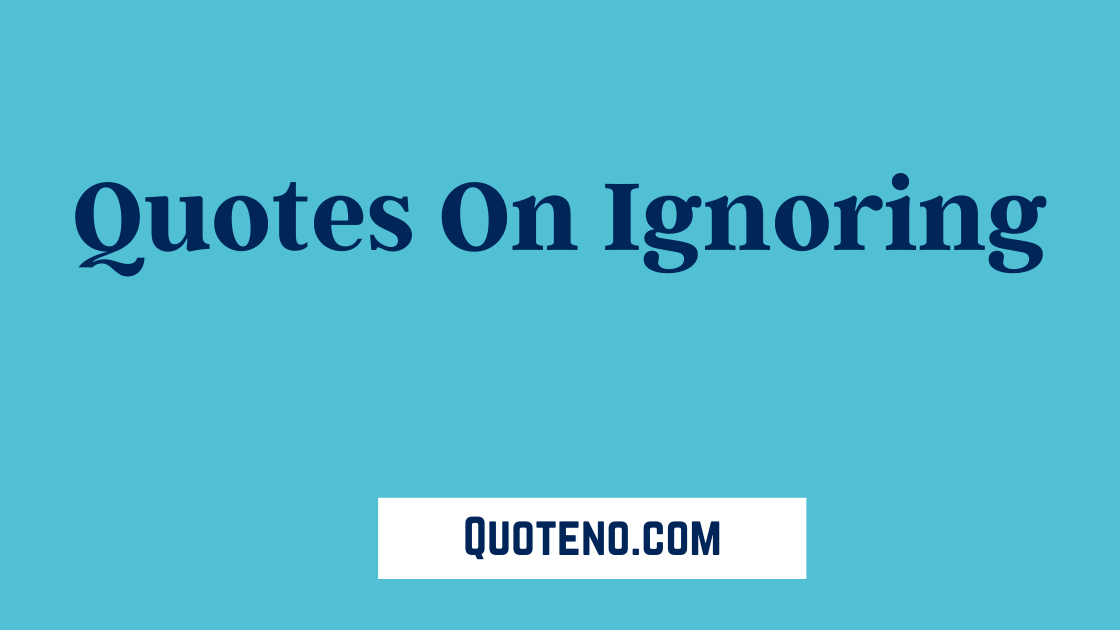 Ignoring quotes and sayings with images. I know the feeling of being ignored is very disheartening especially when you are ignored by loved ones. These disregard quotes give you relief.

It’s a very good move to sort out the relationship ignorance with your friend, sibling, or wife to talk to him first and clearing all misunderstandings, and if things do not work then move on.

Check below these being. ignored quotes to get inspiration and power for facing upcoming situations.

“It would be too easy to say that I feel invisible. Instead, I feel painfully visible, and entirely ignored.” —David Levithan

“You can be with somebody and still feel lonely.”

“That awkward moment when your ‘friends’ don’t invite you to something.”

“The best thing you can do when people are ignoring you is to just keep your chin up, girl.

“I grew up without the love of the people I care for so it must be one of the reasons I can’t feel.”

“Being lonely is like a storm with no rain, crying without tears.”

“One of the worst things in this life is to be discarded by the one you care about the most, girl.”

“I am hurt by your actions, passing me by with your friends and not noticing me one bit, really.”

“Once you feel avoided by someone, never disturb them again.”

“It hurts to be the person who always tries to be what the other needs but never gets appreciated.”

“The worst thing in this life is to be with people who make you feel as if you are all alone.”

“The worst thing a guy could do for a girl Personally I think it’s to ignore her while she’s loving you with all her heart.”

“The most neglected person is often the one that is the kindest, who does not wish to fight for it.”

“Life is too short to tolerate nonsense. cut out negativity. ignore gossip, and let go of fake people and their drama.”

“Even the most intense feelings cease when neglected and taken for granted.” —Anupama Garg

“It is more painful to be ignored than to be hated because it makes you feel like nothing.”

“Being ignored or looked down upon by society means that you need to rise up from the ashes.”

“How come I’m still ignored after all I’ve done for you, I gave you my heart because I cared.”

“Being ignored is just like never getting the approval that you have just been waiting for, girl.”

“I spent a great deal of my life being ignored. I was always very happy that way.”

“What’s worse than being hated? Being ignored. At least when they hate you, they treat you like you exist.”

“Because you are so used to being ignored, you start thinking that it is the right thing to do.”

“Women are often the ones being ignored when they ask for rights to help everyone else.”

“Being ignored is not an option when you have thoughts that are waiting to be heard, my dear.”

“When you reach the top, all of those people who used to ignore you will look at you more.”

“There’s a lot of mediocrity being celebrated, and a lot of wonderful stuff being ignored or discouraged.” – Sean Penn

“I hate being ignored.” – Amanda Palmer

“But they all didn’t see the little bit of sadness in me….”

“I do not like being ignored when someone has my things!”

“Don’t give up or give in in the face of patronizing ridicule, amused disdain, or being ignored.” – Meryl Streep

“My feelings? Oh, don’t worry about those, nobody else does.”

“I spent a great deal of my life being ignored. I was always very happy that way.” – Saul Leiter

“Being ignored is a great privilege. That is how I think I learned to see what others do not see and to react to situations differently. I simply looked at the world, not really prepared for anything.-”  Saul Leiter

Ignoring Quotes For Him – Her

“Being taken for granted can be a compliment. It means that you’ve become a comfortable, trusted element in another person’s life.” —Joyce Brothers

“That bad feeling you get when your crush ignores you, and you just think in your head what did I do.”

“Nothing’s worse than being ignored or disregarded by the one you care for most!”

“That bad feeling you get when your crush ignores you, and you just think in your head what did I do.”

“The opposite of love is not hatred, it’s indifference.”

“The worst feeling: Not getting a reply back from someone you really want to talk to.”

“The only person that deserves a special place in your life is someone that never made you feel like you were an option in theirs.” —Shannon L. Alder

“The worst feeling: Not getting a reply back from someone you really want to talk to.”

“Sometimes, ignoring you is the best way to protect my feelings.”

“The greatest pain in life is to be ignored, to lose the person you love to someone who doesn’t care at all.”

“Ignore me? Okay, that’s cool, just don’t be mad when I ignore you.”

“That moment when you are completely falling apart and nobody notices.”

“It’s so funny how ‘friends’ forget us when they don’t need any more favors.”

“They ignore you now but need you later on.”

“Relationships are worth fighting for, but sometimes you can’t be the only one fighting.”

“I didn’t text you just to exercise my fingers, I was expecting a reply back.”

Attention is necessary in this world, you can’t thrive here without it so you need to keep going.”

“Ignore me? Okay, that’s cool, just don’t be mad when I ignore you.”

“I hate it when you send a long text message to someone & they just reply with k.”

“Each time you ignore me, I regret every text message that I’ve ever sent you.”

“I always hit ‘Ignore Call’ with my middle finger.”

“Oh Great, you can update your status via mobile, but you can’t text me back?”

“I hate being ignored but I love ignoring people.”

“Ignoring me can turn into me never speaking to you again.”

“I’m so talented. I can listen to music and ignore you at the same time.”

When Someone Ignores You Quotes

“While you’re IGNORING her someone else is BEGGING for her attention.”

“It’s sad when you realize you aren’t as important to someone as you thought you were.”

“It hurts the worst when the person that made you feel so special yesterday, makes you feel so unwanted today.”

“When someone shows you who they are, believe them the first time.”

“We never want to be ignored because what we want is to be noticed, to be acknowledged.”

“Some people hurt by words and some by action…but the biggest hurt I believe is that someone is ignoring you when you value them more than anything else.”

“Life can be busy, but it should never take over.” -Maria Shantar

“The cold iron of neglect is sharper to a child’s sensitive nature than any alteration of harshness and affection.” —Annie Edwards

“The sad part of this reality is that even when I try to make time just for you, you forget me.”

“Don’t respond to haters’ taunts – even politely. Ignore them. If nobody takes their bait, most will grow bored and move on.” – Andrew Shaffer

“If I hear one more time, “Ignore everybody and live your own life,” I think I’ll explode.”

Bliss is bliss but ignorance kills. Just don’t ignore it. It is a matter of time before people will start blaming you for the things that have happened to them especially when they are in distress. It is important to realize this and go forward with more positive thinking.

So, avoid bad company and include good company like friends or family who appreciate your time and stay by your side through tough times.

I hope you like these ignoring quotes and sayings. The ignore quotes will help to give you the force and inspiration to face the people who ignore you.