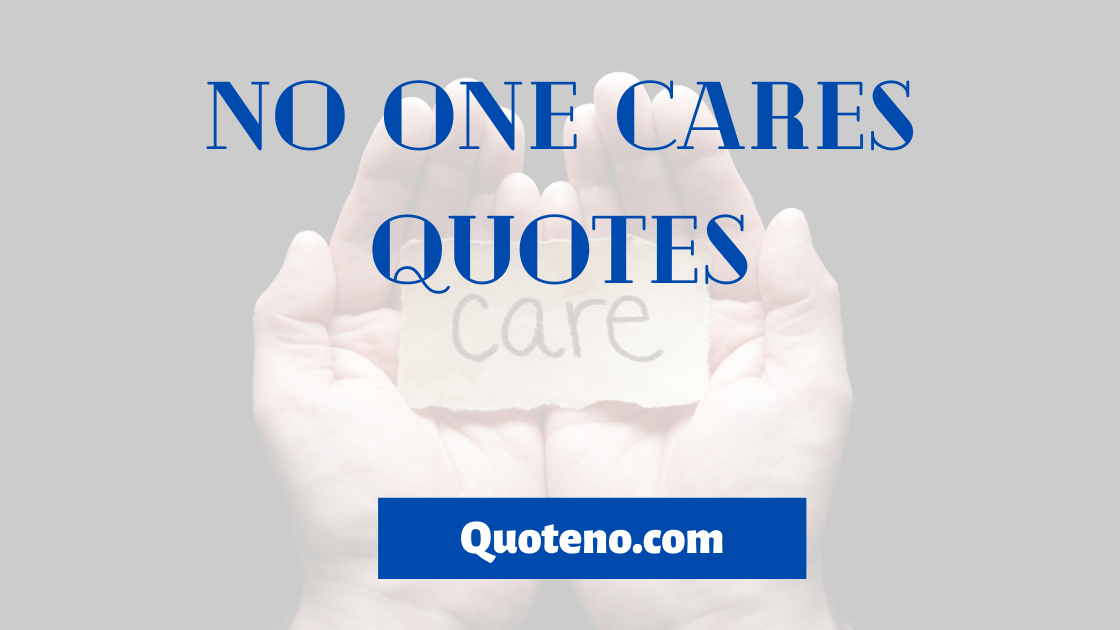 When no one cares about you, In the world, every single person has the deepest desire to be cared for or loved by others. We all want to feel like our life and presence in this world matter to someone special.

With this collection of no one cares quotes with beautiful images you feel you are not alone. The feeling of nobody caring about you is very hearted when we expect a lot from our friends, girlfriend or family.

Hope after reading quotes on no one cares your pain has gone that comes after realizing your actions do not matter to others.

NO ONE CARES QUOTES

“Where’s the use of looking nice, when no one sees me but those cross midgets, and no one cares whether I’m pretty or not?. —Louisa May Alcott

“No one cares about it more than you. Give it the attention it needs. —Robert Kiyosaki

“I study English literature but my friends are doing psychology and things like that. No one cares about acting there. It’s not competitive and it’s a nice environment for me. —Yasmin Paige

“No one loves me, – no one cares for me, but you, mother. —Elizabeth Gaskell

“You feel lonely not when no one cares about you, but when someone you expect to care does not care about you. -unknown

“No one cares until someone cares; be that one!. —Ken Poirot

“It is the nature of creation, no one cares how much you are good or bad, just get famous, they all will walk after you.    —M.F. Moonzajer

“No one is asking what happened to all the homeless. No one cares, because it’s easier to get on the subway and not be accosted. —Richard Linklater

“The greater part of our writers have become so original, that no one cares to imitate them: and those who never quote in return are seldom quoted. —Isaac D’Israeli

“No one cares who is better who is worse who has more who has less. Content in our connectedness we are brothers and sisters after all. —Adele Faber

“No one cares about you, you should care about yourself. —Lilly Ghalichi

“No one cares about it more than you. Give it the attention it needs. —Robert T. Kiyosaki

“If nobody cares, then it doesn’t matter what happens to flowers. —Daniel Dennett

“Nobody cares if you’re an idiot, as long as you’re a useful one. —Mira Grant

“It is not necessary to bury the truth. It is sufficient merely to delay it until nobody cares. —Napoleon Bonaparte

“Embarrassment has a lot to do with thinking too much. Let it go. Nobody cares as much as you think they do. —Ryan Robbins

“Nobody cares about worthiness. People care about what is really inside of you. —Douglas Coupland

“Everywhere there is apathy. Nobody cares whether that which is preached is true or false. A sermon is a sermon whatever the subject; only, the shorter it is, the better. —Charles Spurgeon

“Money is not the thing that drives me. I like to develop assets to create value. No one cares how rich you are or what your ranking is in Forbes magazine. —Mikhail Prokhorov

“Nobody cares how tough your upbringing was. Nobody cares if you suffered some discrimination.  —Barack Obama

“It’s a disease. Nobody thinks or feels or cares anymore; nobody gets excited or believes in anything except their own comfortable little God damn mediocrity. —Richard Yates

“If no one cares for you at all, do you even really exist?. —Cassandra Clare

“No one cares. Apathy is a disease and some days I long for it. —Zoe Trope

“You have to make people realize your worth, else no one cares!. —Anamika Mishra

“You don’t want to play a perfect person; no one cares about that.  —Matthew Morrison

“Reserve is strength; overstatement is weakness. No one cares to hear the singer’s topmost notes when the voice is ‘nigh onto breaking. —John F. Carlson

“You will become way less concerned with what other people think of you when you realize how seldom they do. —David Foster Wallace

“It is amazing what you can accomplish if you do not care who gets the credit. —Harry S Truman

“One unrepaired broken window is a signal that no one cares, and so breaking more windows costs nothing.  —James Q. Wilson

“There is something very freeing about being anonymous because nothing is expected of you; nothing is getting back to anyone, and no one cares.  —Dolly Wells

“At times some may think that no one cares–but someone always cares! Your Heavenly Father will not leave you to struggle alone but stands ever ready to help. —Thomas S. Monson

In Reality, No One Cares Quotes

“You don’t want to play a perfect person; no one cares about that. Matthew Morrison

“It seems unfortunate that strong people are usually so disagreeable and overbearing that no one cares for them. In fact, to be different from your fellow creatures is always a misfortune. –L. Frank Baum

“No one cares to speak to an unwilling listener. An arrow never lodges in a stone: often it recoils upon the shooter of it. —St. Jerome

“No one cares about you. No one cares. You will die and be forgotten. —Frederick Lenz

“Liberating but hard to remember we’re just bit-parts in the lives of people we know, who care very little for our secrets. —Derren Brown

“What is freedom, in the end, but that no one cares any longer to try to restrain us?. —Naomi Alderman

“No one knows who I am and no-one cares. I could jump in front of a cameraman and he’d just tell me to get out of the way. –Eve Hewson

This collection of no one care quotes shows us that every human being has the greatest desire is to be loved or cared for by others.

when you feel like no one cares about me just smile and ignore. We can’t force someone to care for us but we can share our thoughts with others about what we want.

Share your favorite quote from the collection of no one cares quotes in the comment section below.