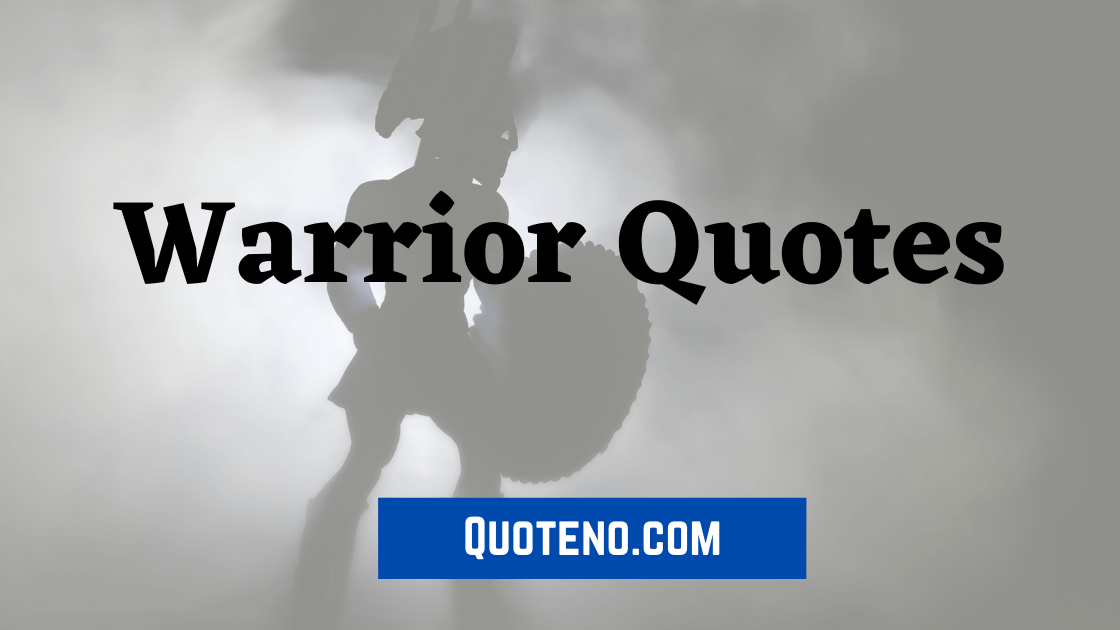 Ultimate warrior quotes and sayings about bravery, and battle with beautiful images. These peaceful warrior mottos help you to find your strength.

We need to set a goal to accomplish being a warrior in our field or domain. It’s a challenging goal in this world where disturbance and disappointments, we can easily say that we can not compete with the current circumstances.

If we simply said we tried our best but were defeated. If you have a warrior mentality, then this is not acceptable.

Every person has a warrior inside of him. A warrior moves forward every day and overcomes obstacles one by one. He did not worry about the challenges, big or small.

So we created a list of the best ultimate warrior quotes and mottos that will inspire you. Wake up your inner warrior and achieve the goals or dreams you set in your life.

“Every victorious warrior draws his strength from the highest source; his love.” ― Tapan Ghosh

“Warriors want a worthy opponent. There is no redress in fighting the pathetic.” ― Donna Lynn Hope

“A warrior acts as if he knows what he is doing when in effect he knows nothing. ―Carlos Castaneda

“Warriors do not argue, but they take decisions.  ―Chukwuemeka E.O.

“Manhood does not make a man, but warriors were born by it. ―Chukwuemeka E.O.

“The average man is hooked to his fellow men, while the warrior is hooked only to infinity. ―Carlos Castaneda

“All men are warriors. And life for everything in our universe is nothing but war.  ―David Zindell

“Great warriors, like great earthquakes, are principally remembered for the mischief they have done. ―Christian Nestell Bovee

“The true warrior understands and seizes that moment by giving an effort so intense and so intuitive that it could only be called one from the heart. ―Pat Riley

“He who conquers himself is the mightiest warrior. ―Confucius

“If a warrior is to succeed at anything, the success must come gently, with a great deal of effort but with no stress or obsession. ―Carlos Castaneda

“The warrior stands, ready to defend, ready to fight for those he serves. He is a warrior of virtue, A knight of conscience. He is who we all wish to be.” ― Anthony T. Hincks

“The true soldier fights not because he hates what is in front of him, but because he loves what is behind him.” ― G.K. Chesterton

“Warriors do not win victories by beating their heads against walls, but by overtaking the walls. Warriors jump over walls; they don’t demolish them. Carlos Castaneda

“Go to the battlefield firmly confident of victory and you will come home with no wounds whatsoever.” ― Uesugi Kenshin

“Victories that come cheap are cheap. Those only worth having come as the result of hard fighting.” – Henry Ward Beecher

Some Warriors look fierce but are mild. Some seem timid but are vicious. Look beyond appearances; position yourself for the advantage.  Deng Ming-Dao

“The warrior’s intention should be simple to grasp his sword and to die. Kiyomasa Kato

“The art of being a warrior is to balance the wonder and the terror of being alive. Carlos Castaneda

“There’s more to being a warrior than killing. A true warrior the best warrior isn’t cruel or mean. He doesn’t claw an enemy who can’t fight back. Where’s the honor in that. Erin Hunter

“A warrior of light who trusts too much in his intelligence will end up underestimating the power of his opponent.     Paulo Coelho

“Ideas are the great warriors of the world, and a war that has no idea behind it is simply a brutality.  James A. Garfield

“Toil and risk are the price of glory, but it is a great thing to live with courage and die leaving an everlasting fame.” – Alexander The Great

“There is no greater warrior than a mother protecting her child. N. K. Jemisin

“The path of the Warrior is lifelong, and mastery is often simply staying on the path.  Richard Strozzi Heckler

“A warrior thinks of death when things become unclear. The idea of death is the only thing that tempers our spirit.     Carlos Castaneda

“Every great warrior must learn to endure and overcome the frustration of life. Lailah Gifty Akita

“The angry man will defeat himself in battle as well as in life.“ unknown

“Strategy is the craft of the warrior.“ Miyamoto Musashi

“Do not fear pain, for as long as you feel it you know you are still Alice.“ unknown

“Kill yourself in training so that you don’t die fighting.” – Alistair Overeem

“Courage, above all things, is the first quality of a warrior.  Karl von Clausewitz

“A warrior must only take care that his spirit is never broken. Shissai

“The two most powerful warriors are patience and time. Leo Tolstoy

“Be a Fearless Warrior, allow Love to be your shield.” – Lady Alexis Essuman

“The big difference between a warrior and a victim is that the victim represses and the warrior refrains.” — Don Miguel Rui

“Warriors suffer for their dreams. Cowards pay for their fears.” – Matshona Dhliwayo.

“Out of suffering have emerged the strongest souls; the most massive characters are seared with scars.”

“Fate whispers to the warrior, ‘You can not withstand the storm.’ The warrior whispers back, ‘I am the storm.’” – Jake Remington

“The essence of warriorship or the essence of human bravery is refusing to give up on anyone or anything.” -Chogyam Trungpa

“Every great warrior must learn to endure and overcome the adversities of life.” – Lailah Gifty Akita

“This is the strange way of the world, that people who simply want to love are instead forced to become warriors.” — Lauren Oliver

“To hold it together when everyone else would understand if you fell apart, that’s true strength.” – Miyamoto Musashi

“Untroubled, scornful, outrageous that is how wisdom wants us to be: she is a woman and never loves anyone but a warrior.” — Friedrich Nietzsche (woman warrior quotes)

“A warrior with a cause is the most dangerous soldier of all. Michael Scott

“Our greatest glory is not in never falling, but in rising every time we fall. Confucius

“They don’t join cliques – more times than not, they stand alone – but they recognize and gravitate towards one another. Only warriors understand other warriors. Forrest E. Morgan

“Karate is a defensive art from beginning to end. Gichin Funakoshi

“Under the sword lifted high there is hell making tremble: But go ahead, and you have the land of bliss. Miyamoto Musashi

“The warrior that has the most confidence in his abilities to fight is usually the most humble person you will ever meet. Terry Bryan

Warriors use their intent and will to shape their lives. All of their actions are conscious, intentional, and complete.     Kerr Cuhulain

“Most of all, warriors are honorable because to be otherwise is cowardly!. Forrest E. Morgan

“A warrior has to believe, otherwise he cannot activate his intent positively.” – Théun Mares

“You can prevent your opponent from defeating you through the defense, but you cannot defeat him without taking the offensive.  Sun Tzu

“Victory is reserved for those who are willing to pay its price.” – Sun Tzu

“The principle on which to manage an army is to set up one standard of courage which all must reach. Sun Tzu

“To be a warrior is to learn to be genuine in every moment of your life. Chogyam Trungpa

“I do what I do because it is the right thing to do. I am a warrior, and it is the way of the warrior to stand up and fight superior odds.” – Paul Watson

“We train and work so hard in our sport – we would be nothing less than a warrior. Day in, day out, that is our life – it’s everything. It’s the Olympic dream.” – Kelita Zupancic

“The more you sweat in training, the less you will bleed in battle. The motto of Navy Seals

“A warrior accepts the challenges of life in true humility. No matter what his destiny may be, it can never be a cause for discontent, but a living challenge which it is his privilege to surmount. Theun Mares

“Fear makes men forget, and skill which cannot fight is useless.  Besides of Sparta

“A warrior…must believe in his strength of will, of purpose, of heart and soul. David Gemmell

“The bravest are surely those who have the clearest vision of what is before them, glory and danger alike, and yet notwithstanding, go out to meet it. ―Thucydides

“One man with courage makes a majority. ―Andrew Jackson

“Show me an undefeated fighter and I’ll show you someone who’s never fought anybody.” – Whitey Bimstein

“A true knight is fuller of bravery in the midst, then at the beginning of danger. ―Philip Sidney

Below are some of the best, ways of peaceful warrior quotes to read and share with others also.

“As a peaceful warrior, I would choose when, where, and how I would behave. With that commitment, I began to live the life of a warrior. ―Dan Millman

“The journey is what brings us happiness, not the destination.” ― Dan Millman

“There are no ordinary moments.” ― Dan Millman

“A warrior does not give up what he loves, he finds the love in what he does” ―Dan Millman

“Be happy now, without reason – or you never will be at all.” ―Dan Millman

“The strength of a warrior is not defined by the wars he wins, but the times he seeks peace. ―Aniket S Sharma

“It is not enough to win a war; it is more important to organize the peace. ―Aristotle

“A warrior doesn’t seek pain, but if the pain comes, he uses it.” ―Dan Millman

It is important to remember that warriors have always been peace-loving individuals, even in times of war. As we all know, being a peaceful warrior is not about never fighting but it’s about using the right tools for the war at hand and knowing when it’s time to walk away from something.

The quotes here provide a valuable reminder for all of us to live our lives in such a way as to foster understanding and coexistence between people, regardless of their nationality or beliefs.

Hope you got motivation and inspiration after reading these inspirational savage warrior quotes. Share your favorite quote in the comment section below.