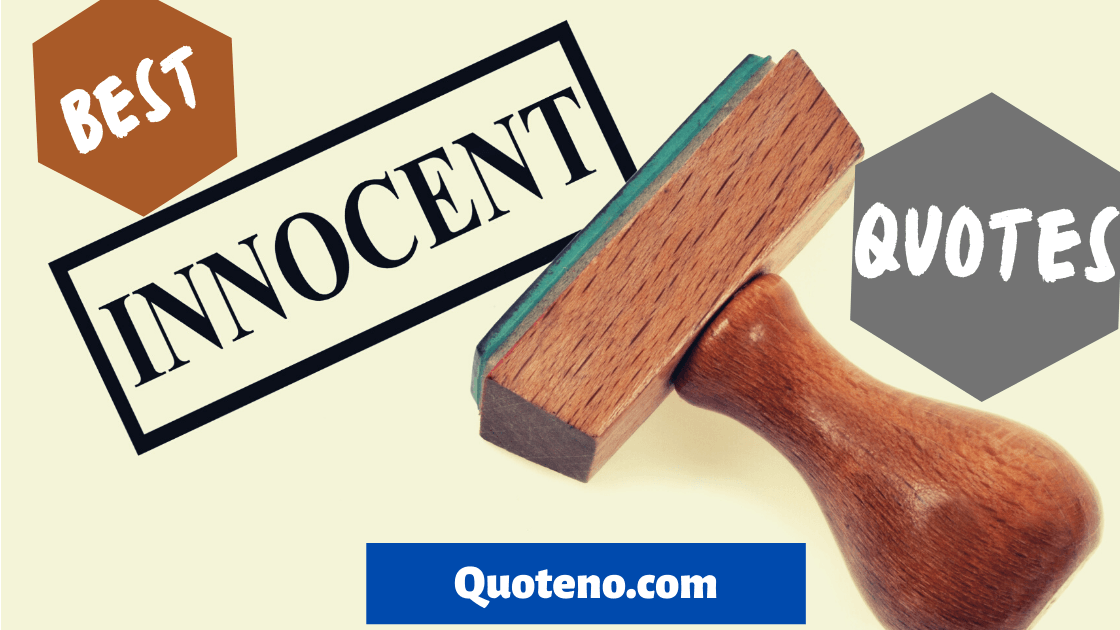 Being Innocent quotes and sayings with beautiful images. I often think that innocence is the greatest asset a person has. It makes us feel like we are in control of our lives and can make any decisions that we want.

Below you will find our best collection of wise, inspirational sweet innocent quotes and sayings collected from different sources.  My favorite innocent quote is “The killing of innocent people is always wrong.” ― Bianca Jagger.

“The innocent is the person who explains nothing.” ― Albert Camus

“Always the innocent are the first victims, so it has been for ages past, so it is now.” ― J.K. Rowling

“The trust of the innocent is the liar’s most useful tool.”― Stephen King

“I’m very mature for my age, but I’m also innocent in a lot of ways.”―Kirsten Dunst

“Your characters have to remain innocent of what your picture is after.”―Douglas Sirk

“A clear and innocent conscience fears nothing.” ― Elizabeth I

“Marvelous are the innocent. ” ― Virginia Woolf

“We become innocent when we are unfortunate.” ― Jean de La Fontaine

“Pain forces even the innocent to lie.” ― Publilius Syrus

“Why do we have this desire to tease the innocent? Is it envy?”― Graham Greene

“The killing of innocent people is always wrong.” ― Bianca Jagger

“No human being is innocent, but there is a class of innocent human actions called Games.” ― W. H. Auden

“It is better that ten guilty persons escape than one innocent suffer.” ―William Blackstone

“Sometimes our time stops when we see someone who is too innocent.” ― Pradip Bendkule

“Saints should always be judged guilty until they are proved innocent.” ― George Orwell

“Once you start asking questions, innocence is gone. ―Mary Astor

“The presumption of innocence only means you don’t go right to jail.” ―Ann Coulter

“Remaining childish is a tremendous state of innocence.” ― John Lydon

“Innocence is a kind of insanity” ― Graham Greene

“When we take revenge against another, we lose some of our innocence.”― Patrice Redd Vecchione

“Innocence eroded into a nightmare. All because of a very bad touch. Love, corrupted.”― Ellen Hopkins

“We each begin in innocence. We all become guilty.” ― Leonard F. Peltier

“The innocence that feels no risk and is taught no caution, is more vulnerable than guilt, and often assailed.” ― Nathaniel Parker Willis

“I’m interested in how innocence fares when it collides with hard reality.” ― Geoffrey S. Fletcher

“The sweet converse of an innocent mind. ” ― John Keats

“There is an innocence in admiration: it occurs in one who has not yet realized that they might one day be admired.” ―Friedrich Nietzsche

“Innocence is like a dumb leper who has lost his bell, wandering the world, meaning no harm.” ― Graham Greene

“The worst of us is not without innocence, although buried deeply it might be. ”― Walt Disney

“Innocence does not find near so much protection as guilt.” ― François de la Rochefoucauld

“No man knows the value of innocence and integrity but he who has lost them.”―William Godwin

“There is but one resource for innocence among men or women, and that is an embargo upon all commerce of bad men.” ― Henry Ward Beecher

“Innocence is one of the most exciting things in the world.” ―Eartha Kit

“Unfortunately the innocent are always involved in any conflict. Always, everywhere, there is some voice crying from a tower.” ― Graham Greene

“Innocence could be considered a discrete state of mind.” ―John Shirley

“I have always said that innocence is much more powerful than experience.”  ― Alejandro Gonzalez Inarritu

“Whoever blushes is already guilty; true innocence is ashamed of nothing.”  ― Jean-Jacques Rousseau

“Innocence ends when one is stripped of the delusion that one likes oneself.” ― Joan Didion

“It’s innocence when it charms us, ignorance when it doesn’t.” ―Mignon McLaughlin

“No one loses their innocence. It is either taken or given away willingly.” ― Tiffany  Madison

“All things truly wicked start from an innocence.”―Ernest Hemingway

“Innocence is like polished armor; it adorns and defends.” ― Robert South

“Go in thy native innocence, rely on what thou hast of virtue, summon all, for God towards thee hath done his part, do thine.” ―John Milton

“Innocence is thought charming because it offers delightful possibilities for exploitation.”  ― Mason Cooley

“Through our own recovered innocence, we discern the innocence of our neighbors.”    ― Henry David Thoreau

“The essential self is innocent, and when it tastes its own innocence knows that it lives forever.” ― John Updike

“Innocence invites protection, yet we might be smarter to protect ourselves against it.” ―Megan Johns

“It is better to risk saving a guilty person than to condemn an innocent one. ” ― Voltaire

“The innocent and the beautiful have no enemy but time.” ― William Butler Yeats

“Innocence bleeding, within the deep warm incision of a preternatural beginning.”―Kurt Philip Behm

“Innocence always calls mutely for protection when we would be so much wiser to guard ourselves against it. ”― Graham Greene

“There are many more layers to innocence than one might ever imagine, and we are ever unaware of them until each barrier is breached.”―  Paula Reed

“An hour of innocence builds more trust than years of diplomacy.” ― Abhijit Naskar

“Innocence was a luxury.”― Leigh Bardugo

“Innocence is a temporary, maybe even an unreal, condition. Destined to die.”  ― Patricia Hamp

“What I call innocence is the spirit’s unselfconscious state at any moment of pure devotion to any object.” ― Annie Dillard

“Innocence, that mild form of mental deficiency, has the same aphrodisiac effect as the softness of the skin.” ― Jean Baudrillard

“The consciousness of innocence is an excellent anchor, no doubt.” ― Albert Payson Terhune