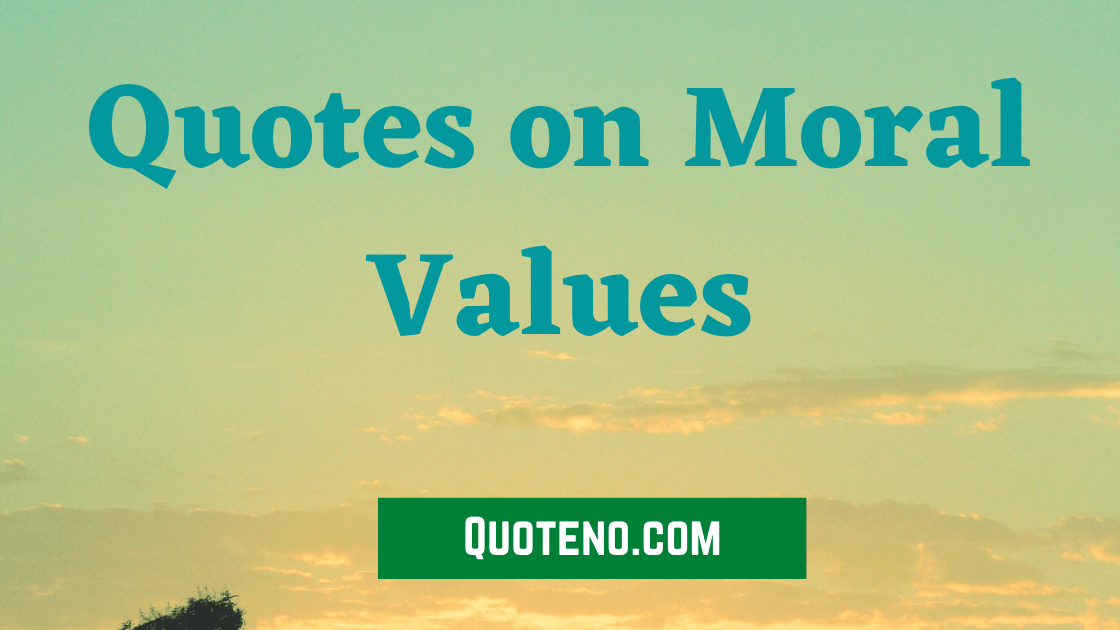 Quotes on moral values in life. Morality is a matter of personal belief. It is an individual’s code of conduct that tells them what is right and wrong.

Our moral values are rooted in basic human values and emotions and experiences that motivate us in certain ways. Values matter to us, they motivate our behavior. People can distinguish between right and wrong or good and evil with the help of their personal core values.

I hope the slogan on moral values in English will give you strength and believe that hope exists. Read this handpicked collection of sayings and quotes on moral values with images and share them with others also or use them as a WhatsApp status on moral values.

My favorite thought on moral values in English is “Compassion is the basis of morality.”

“Do not be deceived: bad company corrupts good morals.” ― Anonymous

“With so many things coming back in style, I can’t wait till loyalty and morals become the new trend again.” – Unknown

“Ask yourself what it is that a code of moral values does to a man’s life, and why he can’t exist without it, and what happens to him if he accepts the wrong standard, by which the evil is good.” – Ayn Rand

“I don’t love Beau yet, I don’t think. But being with him feels like a better version of being alone, and in that way, I think we are each other.” – Emily Henry

“The secret to achieving inner peace lies in understanding our inner core values – those things in our own lives that are most important to us – and then seeing that they are reflected in the daily events of our lives.” -Hyrum W. Smith.

“There can be as many wrong reasons to do the right thing as there are stars in the sky. There might even be more than one legitimate right reason. But there is never a right reason to do the wrong thing. Not ever.” – Donita K. Paul

“You just can’t believe how quickly things happen in football and the way life turns. I went from being the bad guy, the worst player who gets all the criticism, to be the player who makes the difference and scores the important goals.” -Luis Suarez

“Behind the mask of indifference is bottomless misery and behind apparent callousness, despair.” – John Bowlby

“Immorality, no less than morality, has at all times found support in religion.” -Sigmund Freud.

“Compassion is the basis of morality.” ― Arthur Schopenhauer

“Aim above morality. Be not simply good, be good for something.” -Henry David Thoreau.

“There is no greatness where there is not simplicity, goodness, and truth.” -Leo Tolstoy

“Keep your eyes on the stars, and your feet on the ground.” – Theodore Roosevelt

“A knight errant who turns mad for a reason deserves neither merit nor thanks. The thing is to do it without cause.” – Miguel De Cervantes

“We must adjust to changing times and still hold to unchanging principles.” – Jimmy Carter

“Sometimes it is better to lose and do the right thing than to win and do the wrong thing.” -Tony Blair

“Sometimes it is better to lose and do the right thing than to win and do the wrong thing.” -Tony Blair.”

“My faith has been the driving thing of my life. I think it is important that people who are perceived as liberals not be afraid of talking about moral and community values.” -Marian Wright Edelman

“When the day-to-day life is suppressing you, how could you put your moral values and willpower into the realm of life?.” – Nilantha Ilangamuwa

“The first principle of value that we need to rediscover is this: that all reality hinges on moral foundations. In other words, this is a moral universe, and there are moral laws of the universe just as abiding as the physical laws. ― Martin Luther King Jr

“Moral values have been thrown out the window. Christianity is out the window. And that’s wrong. Parents should be at home, teaching kids right from wrong, making sure they get a great education so they can be a success in life.” – Albert Belle

“Work hard, do your best, live the truth, trust yourself, have some fun and you’ll have no regrets.” – Byrd Baggett

“This, in every hour and every issue, is your basic moral choice: thinking or non-thinking, existence or non-existence, A or non-A, entity or zero.” -Ayn Rand

“We care about moral issues, nobility, decency, happiness, goodness—the issues that matter in the real world, but which can only be addressed, in their purity, in fiction. – Orson Scott Card

“I wish I could make him understand that a loving good heart is riches enough and that without it intellect is poverty. – Mark Twain

“When I despair, I remember that all through history the way of truth and love has always won.” -Mahatma Gandhi

“It is not the level of prosperity that makes for happiness but the kinship of heart to heart and the way we look at the world.” -Alexander Solzhenitsyn.

“Well, for one, you walk around like you’re so much better than everyone else. We’re all a bunch of soulless animals or something in your eyes, I guess. You’re the high and mighty one and I ain’t fit to drink your piss.” – Michael Monroe

“A man’s ethical behavior should be based effectually on sympathy, education, and social ties and needs; no religious basis is necessary. Man would indeed be in a poor way if he had to be restrained by fear of punishment and hope of reward after death.” – Albert Einstein

“What distinguishes knowledge is not the certainty but evidence.” – Jerry A. Coyne

“Sometimes the best revenge is to smile and move on.” – Unknown

“If everyone realized the value of life, the world would be peaceful. The meaning of these words, “Do unto others as you would have them, do unto you,” would be understood: It would be practiced.”  -Ellen J. Barrier

“A highly developed values system is like a compass. It serves as a guide to point you in the right direction when you are lost.” – Idowu Koyenikan

“I want to talk to you and want to listen to you. I want to walk with you and, yes, I want you in my bed. That’s what I want today. That’s what I’ll want in a hundred years. If you promise to be my wife forever, I will pledge myself to your happiness.” – Christina Dodd

“It is forbidden to kill; therefore all murderers are punished unless they kill in large numbers and to the sound of trumpets.” -Voltaire.

“I stand for honesty, equality, kindness, compassion, treating people the way you want to be treated, and helping those in need. To me, those are traditional values.” -Ellen Degeneres.

“Greatness is not found in possessions, power, position, or prestige. It is discovered in goodness, humility, service, and character.” – William Arthur Ward

“Knowledge and skills alone cannot lead humanity to a happy, dignified life. Humanity has every reason to place proclaimers of high moral standards and values above the discoverers of objective truth.” – Albert Einstein

Hope you like the quotes on moral values in life. Share your thoughts on good moral values. Which quotations do you like in the collection of morals quotes tell us in the comment section below?