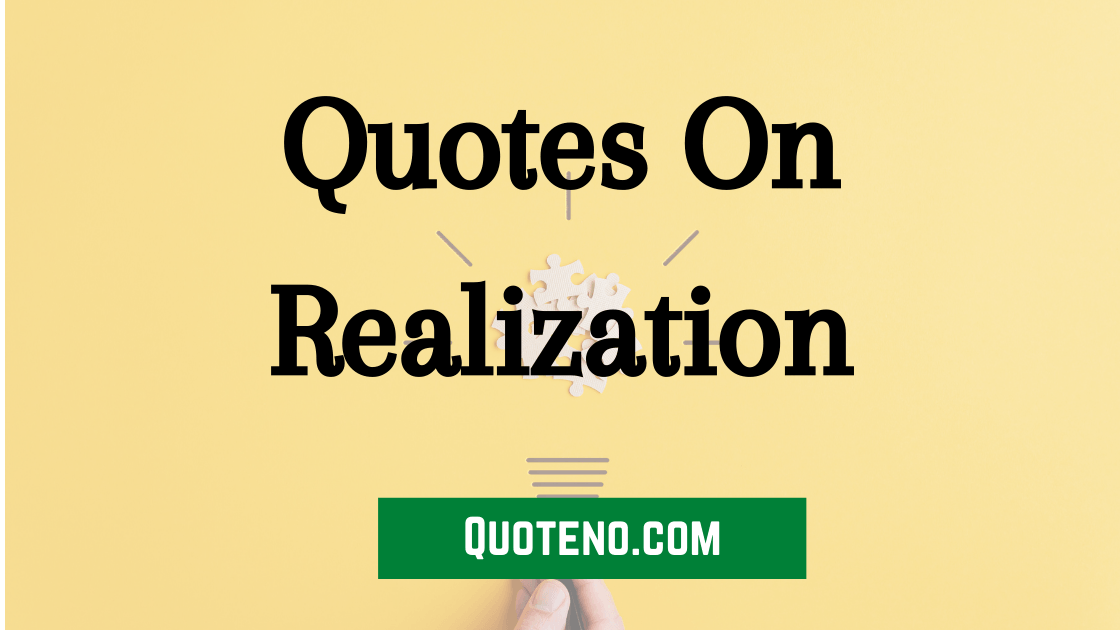 Realization quotes and sayings with beautiful images. These quotes about realization will help you realize what you are in life.

Self-realization is the process of becoming aware of your own identity and the role you play in the world. This realization can be difficult, but it’s essential to our growth and progress.

One incident in your life changes you entirely including your belief and practices. These awareness quotes help to inspire you.

“Realize deeply that the present moment is all you have. Make the NOW the primary focus of your life.” ― Eckhart Tolle

“Live simply. Deepest joy is like a flower beautiful in essence.” ― Tony Samara

“Your inner strength is your outer foundation.” – Allan Rufus

“A dream will not become an innovation if there is no realization.” – Ciputra

“The realization of ignorance is the first act of knowing.” – Jean Toomer

“Success is the progressive realization of a worthy goal or ideal.” – Earl Nightingale

“With the realization of one’s own potential and self-confidence in one’s ability, one can build a better world.” – Dalai Lama

“He who conquers himself is the mightiest warrior.” – Confucius

“You are your master. Only you have the master keys to open the inner locks.” – Amit Ray

“Often, it’s not about becoming a new person, but becoming the person you were meant to be, and already are, but don’t know how to be.” ― Heath L

“Keep your best wishes, close to your heart and watch what happens.” – Tony DeLiso

“Your greatest awakening comes, when you are aware of your infinite nature.” – Amit Ray

“I believe in the limitlessness of humans. We’re capable of incredible things. At times, that realization is frightening.” – Alicia Keys

“You have all the reasons in the world to achieve your grandest dreams. Imagination plus innovation equals realization.” – Denis Waitley

“You must have a level of discontent to feel the urge to want to grow.”― Idowu Koyenikan

“The only limit to our realization of tomorrow will be our doubts of today.” – Franklin D. Roosevelt

“It’s not logical, self-realization. If it was, everybody would be self-realized because everybody is logical.” – Frederick Lenz

“How much easier is self-sacrifice than self-realization!.” – Eric Hoffer

“Self Realization is the first encounter with reality.” – Nirmala Srivastava

“Self-realization is effortless. What you are trying to find is what you already are.” – Ramesh Balsekar

“Your own Self-Realization is the greatest service you can render the world.” – Ramana Maharshi

“Self-realization: No ego, no desires, no weight problems, no tax forms, no death to die, no life to live.” – Frederick Lenz

“Don’t be satisfied with stories, how things have gone with others. Unfold your own myth.” – Rumi

“Happiness is part of who we are. Joy is the feeling.” – Tony DeLiso

“Not until we are lost do we begin to understand ourselves.” – Henry David Thoreau

“There is a God part of you. Consciousness. The pure Self. Learn to listen to the voice of that Power.” – Amit Ray

“Self-realization is a comedown from salvation, but still gives us something to hope for.” – Mason Cooley

“Stand up for who you are. Respect yourSelf and ignite the divine sparks in you. Access your powers. Choose your rights and work together with others to bring blessings into their lives.” – Amit Ray

“The secret to having everything you want out of life is the realization that you really don’t want most of the things you think you want.” – Bo Bennett

“I would argue that nothing gives life more purpose than the realization that every moment of consciousness is a precious and fragile gift.” – Steven Pinker

“Happiness is your nature. It is not wrong to desire it. What is wrong is seeking it outside when it is inside.” – Ramana Maharshi

“ I’m not exactly ambitious as much as I have a very good realization of what I am and what I am capable of.” – Henry Rollins

“There is joy in work. There is no happiness except in the realization that we have accomplished something.” – Henry Ford

“Love is the easiest and most effective way to begin our search for self-realization.” – Frederick Lenz (love realization quotes)

“True love is usually the most inconvenient kind.” ― Kiera Cass

“Only you can take inner freedom away from yourself, or give it to yourself. Nobody else can.” – Michael A. Singer

“When in a relationship, a real man doesn’t make his woman jealous of others, he makes others jealous of his woman.” ― Steve Maraboli

“It’s been hard, but I’ve finally come to the realization that it’s okay to not be perfect.” – Jessica Simpson

What is your point of view on realization? Share your perspective below with us. what is your favorite quote from the collection of quotes on realization shared below in the comment section below?.