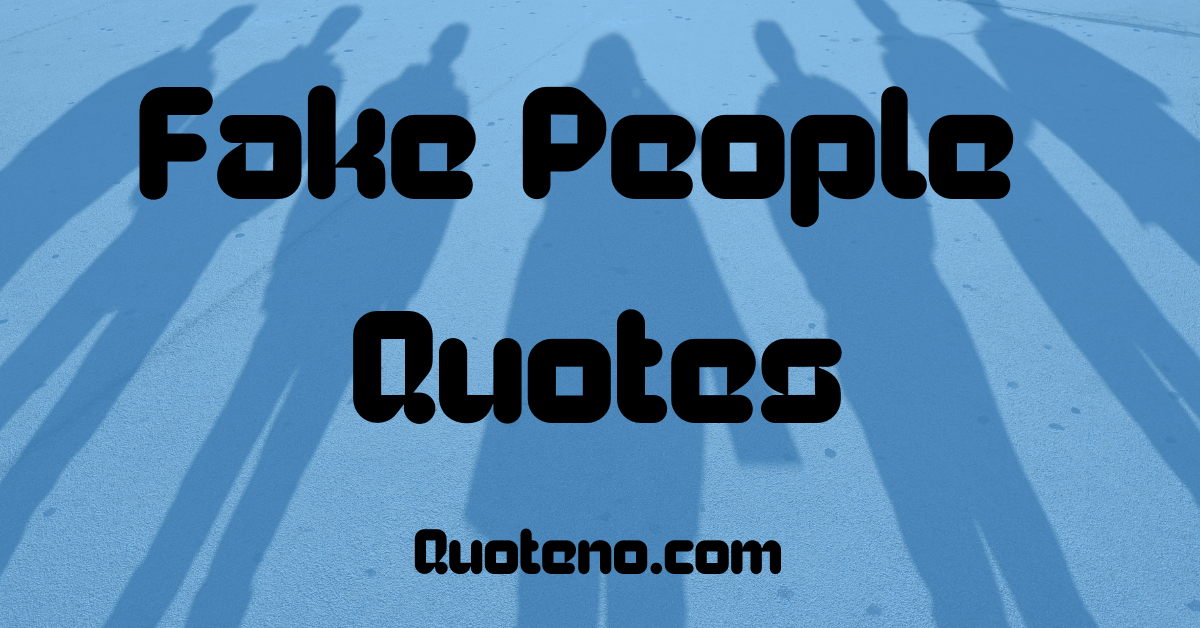 Sarcastic Fake people quotes and fake friends quote with images. You face counterfeit people’s daily routines. These days, it’s tough to find genuine people in our society. It’s not meaning everyone is fake, and you ask every person if you are fake or real.

You can not judge any person; it’s fake or real. If you find any person or friend is fake, just get rid of him.

Fake people in life tend to get into your head. They make you feel like you can’t be yourself and that you need to change in order to fit into their world. These people are usually people who are struggling with their own insecurities, which makes them not want to accept reality and they want to be accepted. It’s important to stay away from people like this since they are toxic.

They may be people who pretend to be nice and caring, but they don’t have your best interests at heart. The best way to avoid them is to be your own person, always. Believe in yourself You are special and you are worth it.

The most common form of fake friends is the friend who just wants to use you for their own gain. There are fake friends that we face in life. We need to stay away from them and not let them into our lives.

If you find any affected person in your life, you can probably relate to him with these sayings, quotes about fake people, and fake friends.

“What’s the whole point of being pretty on the outside when you’re so ugly on the inside?” ― Jess C. Scott

“A person’s character is shown through their actions in life NOT where they sit on Sunday.” ― Navonne Johns

“Life is too short for fake butter, cheese, or people.”

“Fake is the new trend and everyone seems to be in style.”

“Fake people are like soap bubbles, they pop out when the sun shines brightly.” ― Chiranjude Bird

“Some people forget about you until they want something from you.”

“Fake people always try to put you down”

“Trust on their action, not on words”

“Walk away from people who just care about themselves”

Quotes On Fake People And Their Jealousy

“Trust someone when their action match their words”

“People may not always tell you how they feel about you, but they will always show you. Pay attention.” – Keri Hilson

“Fake people are always jealous of your achievement”

“Stop crossing oceans for people who won’t jump puddles for you.”

“Pay close attention to the people who don’t clap when you win.”

“Sometimes it’s not the people who change, it’s the mask that falls off.”

“People think being alone makes you lonely, but I don’t think that’s true. Being surrounded by the wrong people is the loneliest thing in the world.”

“You will never have to question the intentions or integrity of people who have your best interest at heart.” – Germany Kent

“People don’t change, they reveal who they really are.”

“Real ones will always prove themselves”

“Don’t hide your true intention because time will expose everything so stay real, not fake”

“Fake people hate honesty. It’s the lies that keep them feeling good about themselves and their lives. So share your true feelings about their actions and watch how they fade away.”

Quotes On Fake Friends And Betrayal

“Betrayal is never easy to handle and there is no right way to accept it.”― Christine Feehan

“Betray a friend and you’ll often find you have ruined yourself.” — Aesop

“The worst pain in the world goes beyond the physical. Even further beyond any other emotional pain, one can feel. It is the betrayal of a friend.” ― Heather Brewer

“Betrayal is common for men with no conscience.”― Toba Beta

“Shattered legs may heal in time, but some betrayals fester and poison the soul.”― George R.R. Martin

“The worst part of success is trying to find someone who is happy for you.” – Bette Midler

“You should be aware of fake friends because it is the hardest to be aware of.” – Eraldo Banovac

“Being betrayed is one of the most valuable lessons life can teach.” – Shania Twain

“When you see the genuine, you don’t deal with the fakes anymore.” – Nima Davani

“Fake friends get mad when we don’t pretend to like them.” – Carlos Wallace

“Flee from fake friends. There is nothing called a half-truth. Whatever looks like a lie is a lie!” – Israelmore Ayivor

“Neither a fake friend nor a liar can be trusted, with a secret.” – Ellen J. Barrier

“Fake friends are everywhere around you. They will use you and when you are no longer of use, throw you away like a wrapper.” – Shizra

“One fake friend can do more harm than 10 enemies Be smart in choosing your friends.” – Ziad K. Abdelnour

“When people are two-faced the only thing you’ll know for sure is that you can’t trust either of them.”

“You always knew after shitty things happened, who your friends really were.” – Jodi Picoult

Quotes about fake friends and moving on

“Fake friends will believe the gossip about you, but real friends know better and stand up for you.”

“Better an honest enemy than a false friend.” – German Proverb

“Fake friends are like shadows: always near you at your brightest moments, but nowhere to be seen at your darkest hour.” – Khalil Gibran

You tell your friends your most personal secrets, and they use them against you.” – Sophie Kinsella

“Share your weaknesses and hard moments. Share your real side. It’ll either scare away every fake person in your life or it will inspire them to finally let go of that mirage called “perfection” which will open the doors to the most important relationships you’ll ever be a part of.” Dan Pearce

“Having fake friends is like hugging cactus. The tighter you hug, the more pain you get.” — Riza Prasetyaningsih

“Genuine friendship can only be based on trust and affection, which can only arise when there is a mutual sense of concern and respect.”

Remember, trust is an essential factor in your life. If you trust anyone and he is sincere with you, it’s time to leave him.

If you are also deceived by fake people, then read and share these I hate or fuck counterfeit people quotes and sayings.