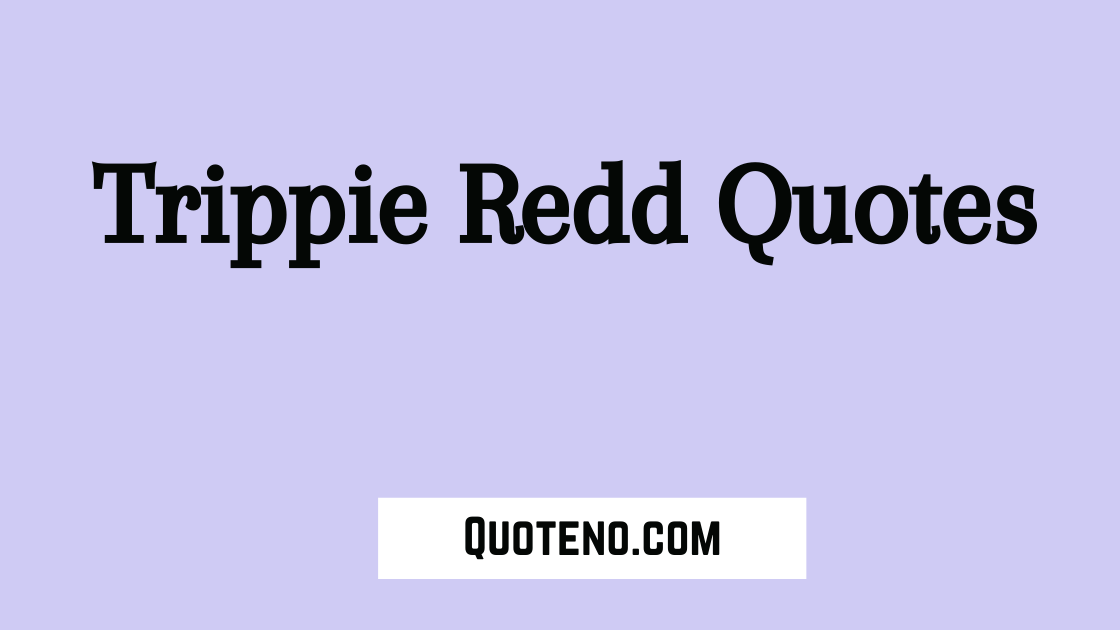 Trippie Redd quotes and sayings, lyrics about love life with images. Trippie Redd is a well-known American singer, rapper, and songwriter. His full name is Michael Lamar White IV. He is mostly known for his songs Dark Knight Dummo” and “Topanga”.

“ Baby, your love is my medicine, when I’m up, bring me down.” Trippie Redd

“No artist that beefs with me or talks down on my name has that many platinum songs. They’re all gold.” – Trippie Redd

“ I can waste your time or I can change your life, I said now.” Trippie Redd

“I believe in the Devil and believe there’s a God, too. I met God at church – the Catholic Church.” – Trippie Redd

“Get whatever tattoos you want, just make sure they mean something at least.” – Trippie Redd

“If I die and I gotta couple Grammys on me, more than a couple hits on me, I got some plaques and I got billboards still up and I done touched a lot of people’s souls and I’m viral, once that happens then you can judge all you want.” – Trippie Redd

I recorded it in the dark and didn’t have a pen, no pad. I was in the dark in the whole opposite room. It was cold as fuck. Nobody was watching me and shit, so I got really into character and made this shit. ~Trippie Redd

“I was in Lil Wayne’s studio, and I had recorded over this Detail-beat. And it was the “F**k Love” of course. Then I posted on Instagram snippet the night after, or the day after matter of fact. And X had, he had texted me, he was like, ‘Bro, I need that. Sent it to him, and he was like, ‘Bro, I’m putting this on my album’. I’m like, ‘Alright, pet’. And that’s how it happened.” – Trippie Redd, Montreality

“Music took me from a real dark place to a real bright one.” – Trippie Redd

“Kanye on the track and LeBron. That’s fire.” – Trippie Redd

I don’t know what planet I’m on (I’m on Mars).” Trippie Redd

“I worked at Little Caesar’s for about two days, bro. I was out. That’s the only job I’ve ever had.” – Trippie Redd

“I and my friends made a group called 1400 and the number always stuck with me. I always see it everywhere I go. There’s an angel behind the number, it’s an angelic number.” – Trippie Redd

“I just bought my mom a new Wraith, thanking god for a brand new day, and I’m on the road, I’m just thinking about your face.” – Trippie Redd, It Takes Time

“ You used to say you were in love

I used to say that sh*t back

Taking that sh*t from the heart

Now look where the fu*k where we at

Girl, you got me just going out bad

Love scars and you got me real sad

I was hoping that sh*t was gon’ last.” Trippie Redd

“Time is of the essence

“We a different kind, and we are at different times.” Trippie Redd

“There’s nobody in this world for me but you,” – Trippie Redd

“Love is something that should last forever, it’s the best thing there is,”- Trippie Redd

“I used to be scared of love, now I’m just scared of letting it go,”-Trippie Redd

“ Shawty, I just want your love for a minute

I will be captain baby, you can be lieutenant

You won’t get a dime, Nah, no, not mine.” Trippie Redd

“Okay, and this is for every rapper that had a shot at sendin’ me

Your efforts ain’t getting you anywhere in this industry.” Trippie Redd

“ Hey, your love, is so amazing

It’s all I want, got a nig*a faded

Shawty on fire, and she really blazing’

“All my life I been limitless, nig*a never had a limit

“Yeah, rollin’ around in the ‘Rari, you still in the Civic

Yeah, rollin’ around in my city, I feel like I’m Diddy

And Yeah, all these nig*as they some suckers, I show ’em no pity” Trippie Redd

“I was trapping, getting it by my ‘lone

Rocket got them pints for the low

Chris got the rocket, he gon’ blow.” Trippie Redd

Get this green then smoke this green, gotta stay potent.” Trippie Redd

Trippie Redd is a rapper and songwriter who is known for his raw lyrics and powerful melodies. I hope you like these Trippie Redd quotes, sayings, and lyrics. Share your favorite in the comment section below.