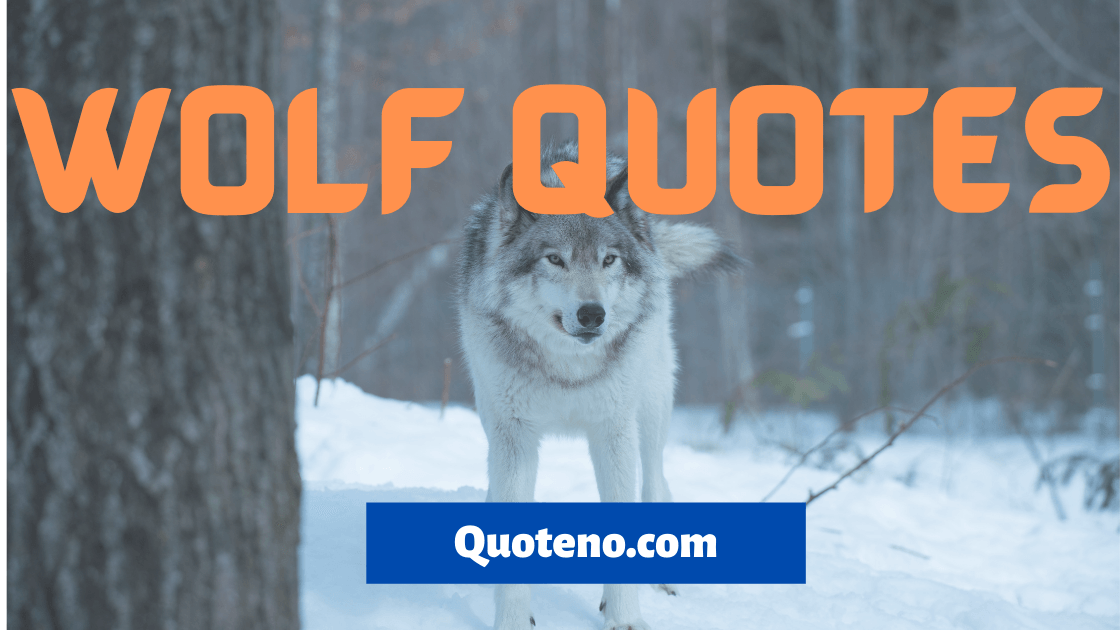 Lone wolf quotes and sayings with beautiful images. If you are motivated by wolves then these quotes are for you they will give you strength and make you smarter.

The wolf is a symbol of spirit, loyalty, and protection. Wolves are one of the best predictors on the earth. The natural world is simply admirable for its life and mentality.

Wolfs have clear intelligent eyes. They represent his strong connection of intelligence and communication with nature and the awareness qualities that we all aimed for.

These powerful wolves quote with beautiful images to inspire you. They teach us how we trust our minds and hearts and worked as a team. They know working together is good. We humans also need to work together for good results.

Below are a collection of inspirational strength, wise, and thought-provoking lone wolf quotes, and proverbs.

“The wolf on the hill is never as hungry as the wolf climbing the hill. – Arnold Schwarzenegger

“Report makes the wolf bigger than he is.” – German Proverb

“Fierce as the prowling wolves at the close of the day, and swift as eagles in pursuit of prey.” – Thomas Parnell

“Everyone knew there were wolves in the mountains, but they seldom came near the village – the modern wolves were the offspring of ancestors that had survived because they had learned that human meat had sharp edges.” -Terry Pratchett

“Throw me to the wolves and I will return, leading the pack. -Unknown

“That night the wind was howling almost like a wolf and there were some real wolves off to the west giving it lessons.” – George R.R. Martin

“A man might befriend a wolf, even break a wolf, but no man could truly tame a wolf.” – George R R Martin

“Once I tried to do Jack London’s ‘Sea Wolf’ as a picture. I wanted to film most of the scenes at sea but ran into opposition from those who wanted studio sets.“ Sterling Hayden

“She slept with wolves without fear, for the wolves knew a lion was among them.” ― R.M. Drake

“In the calm, deep waters of the mind, the wolf waits.” – F.T. McKinstry

“If you run from a wolf, you may run into a bear.” – Lithuanian

“Wolves and people were not natural enemies. The humans’ relationship with other animals established their rivalry with wolves.”― Jon T Coleman

“Fear isn’t so difficult to understand. After all, weren’t we all frightened as children? Nothing has changed since Little Red Riding Hood faced the big bad wolf. ― Alfred Hitchcock

“Don’t lower your expectations to fit into the world, you were born to stand out. – Lone Wolf

“Be like a lion and a wolf, then you have a big heart and the power of leadership.“ ― Unknown

“The wolves prey upon the lambs in the darkness of the night, but the bloodstains remain upon the stones in the valley until the dawn comes, and the sun reveals the crime to all.” – Khalil Gibran

“Wolves are a symbol of guardianship, loyalty, and spirit. Their ability to make quick and firm emotional attachments is incredible. –unknown

“I think I’m still a lone wolf, internally. And I always will be.” – Rob Halford

“Like crying wolf, if you keep looking for sympathy as a justification for your actions, you will someday be left standing alone when you really need help.” ― Criss Jami

“Even a wolf knows how to be polite when animalistic humans have no clue about politeness.” — Munia Khan

“I guess I’m pretty much of a lone wolf. I don’t say I don’t like people at all, but, to tell you the truth, I only like it then if I have a chance to look deep into their hearts and their minds.” – Bela Lugosi

“The wolves in the woods have sharp teeth and long claws, but it’s the wolf inside who will tear you apart.” – Jennifer Donnelly.

“Wolves remind us that everything is so much easier when we share the load. Hopefully, the wolf quotes above will inspire you to develop epic teamwork skills. –unknown

“We have doomed the wolf not for what it is, but for what we deliberately and mistakenly perceive it to be –the mythologized epitome of a savage ruthless killer – which is, in reality, no more than a reflected image of ourselves.” ― Farley Mowat

“I am not a wolf in sheeps clothing, I’m a wolf in wolf’s clothing.” – Ricky Gervais

“Where there are sheep, the wolves are never very far away.” – Plautus

“A wolf eats sheep but now and then; Ten thousand are devoured by men. An open foe may prove a curse, but a pretend friend is worse.” – John Gay

“Make yourself a sheep and the wolf will eat you.” –German Proverb

“Democracy must be something more than two wolves and a sheep voting on what to have for dinner.” – James Bovard

“‘Tis a silly sheep that makes the wolf her confessor.” – French Proverb

“It never troubles the wolf how many the sheep may be.” – Virgil

“Some people aren’t who they say they are, be cautious of the company you keep, a wolf in sheep’s clothing.” – Unknown

“It is madness for a sheep to talk of peace with a wolf.” – French proverb

“The wolf will never lose sleep, worrying about the feelings of sheep. But no one ever told the sheep, that they outnumber the wolves.” – Bray Wyatt

“When shepherds quarrel, the wolf has a winning game.” – German proverb

“The wolves in the uniform with the license to do that.” – Ehsan Sehgal

“If you live among wolves you have to act like a wolf.” – Nikita Khrushchev

“Everybody needs his memories. They keep the wolf of insignificance from the door.” – Saul Bellow

“The Canis Lupus, both wolf, and man were meant to be a family with one another. We gain strength through our bond with each other.” – Quinn Loftis

“When one runs with the wolves, one must howl with the pack.” – Leon Trotsky

“The wolves knew when it was time to stop looking for what they’d lost, to focus instead on what was yet to come.” – Jodi Picoult

“The black wolf’s curse awakes every time that a full moon points in the middle of the sky.” – Pet Torres

“The gaze of the wolf reaches into our soul.” – Barry Lopez

“There’s always the hyena of morality at the garden gate, and the real wolf at the end of the street.“ D. H. Lawrence

“Wolves go after a wounded deer, it is the nature of the beast.” – Barbara Delinsky

“Hunger drives the wolf out of the wood.” – German Proverb

“We both fell asleep wrapped up together with the wolves still lullaby-ing us in the background.” – April Genevieve Tucholke

“Those are the voices of my brothers, darling; I love the company of wolves.” – Angela Carter

“If the wolf would cease his running, the people would cease their shouting.” – German proverb

“The wolf’s clear, intelligent eyes brushed mine. The wolf is gentle-hearted. Not noble, not cowardly, just non-fighting.” – Lois Crisler

“When a wolf doesn’t want to do something, they look really cute.” – Michelle Paver

The wolf may fight the bear, but the rabbit always loses.” – Robert Jordan

“Man is to man either a god or a wolf.” – Desiderius Erasmus

“Some girls are full of heartache and poetry and those are the kind of girls who try to save wolves instead of running away from them.” ― Nikita Gill

“Scared people will do things that you wouldn’t believe.” -Scott McCall

“Life can’t ever be all bad or all good. You know, eventually, things have to come back to the middle.” -Scott McCall

“Now we have allies who used to be enemies. Now we have protectors. We have friends willing to fight for us.” -Scott McCall.

“No more peace summits and running. No more half measures.” -Scott McCall

I hope you enjoy these quotes give you the strength to cross the obstacles in your life like a wolf you chase your dreams. Share your favorite lone wolf quote in the comment below.