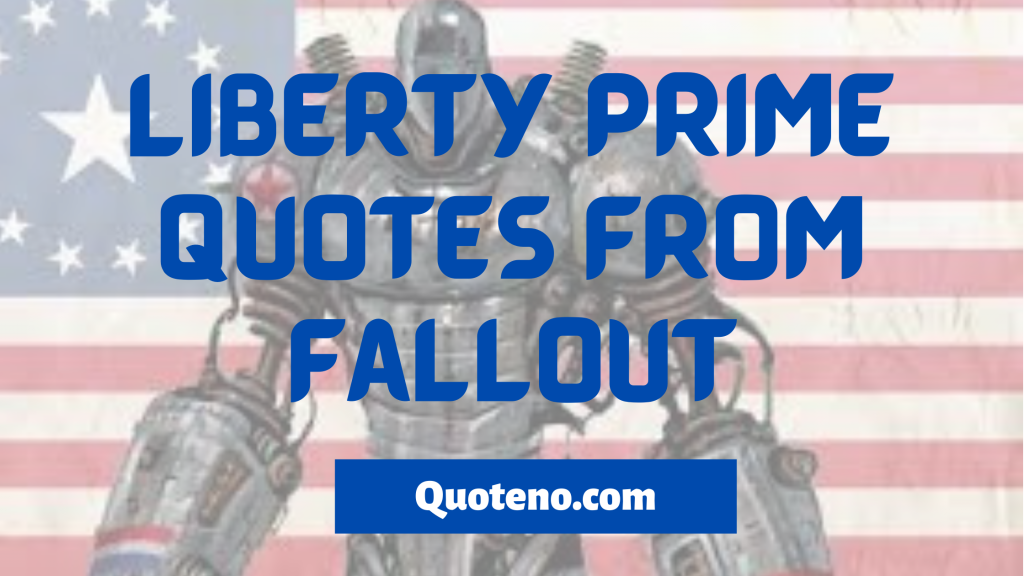 What is the liberty Prime?

Liberty Prime is a huge unique robot of the U.S army that is a symbol of freedom and liberty. Its created by the brotherhood of steel. It was repaired by the lone – survivor and dr Madison Li when he is destroyed by an Enclave airstrike in Broken Steel. It’s forty feet tall (12.19 meters) and its heavily armored, including its arming with a strong eye laser and tactical nuclear bombs makes him a serious combat asset.

Liberty Prime is a combat robot that is currently in the possession of a brotherhood of steel. It appears in fallout 3 and fallout 4.

A lot of quotes are given the reference to ’50s and ’60s anti-communist slogans, made to be more precise to China. we compiled the fallout quotes list hope you like it.

“Embrace democracy, or you will be eradicated.”

“Glory is the reward of valor.”

“Freedom is the sovereign right of every American.”

“I hold these truths to be self-evident, that all Americans are created equal and are endowed with certain unalienable rights.”

“Democracy will never be defeated.”

“Honouring the fallen is the duty of every red-blooded American.”

“Communism is the very definition of failure.”

“Democracy is the truth. Communism is death.”

“Defeat is not an option” – Liberty Prime

“Communism is a temporary setback on the road to freedom.”

“Death is a preferable alternative to communism. – liberty prime”

“Only together can we stop the spread of communism”

“Defending life, liberty, and the pursuit of happiness.”

“Mission: the destruction of any or all Chinese communists.”

“Accessing dictionary database. Entry: Democracy- a form of government in which the leader is chosen by vote and everyone has equal rights.”

“I hold these truths to be self-evident that all Americans are created… equal. And are endowed with certain unalienable rights.”

“Freedom is always worth fighting for.”

“Communism is a lie. – liberty prime”

“Accessing dictionary database. Entry: Communism- a form of government in which the state controls everything and the people are denied freedom.”

“Warning: All personnel should move to minimum safe distance”

“We will not fear the Red Menace.”

“Memorial site; recognized. Honoring the fallen is the duty of every red-blooded American. Patriotism subroutines; engaged.”

“Democracy is freedom, Communism is tyranny.”

“Global positioning initialized. Location: the Commonwealth of Massachusetts, the birthplace of American freedom.”

“Liberty Prime is online. All systems are nominal. Weapons hot. Mission: the destruction of any and all Chinese communists.”

“Memorial site recognized. Patriotism subroutines engaged. Honoring the fallen is the duty of every red-blooded American.”

“I hold these truths to be self-evident that all Americans are created… equal. And are endowed with certain unalienable rights.”

“Democracy is the essence of good. Communism, the very definition of evil.”

If you are a liberty prime lover then you also need to remain solid and face every challenge of life and defeat the difficulties in your life. If you like these quotes from liberty prime share your favorite liberty prime quote below in the comment section.