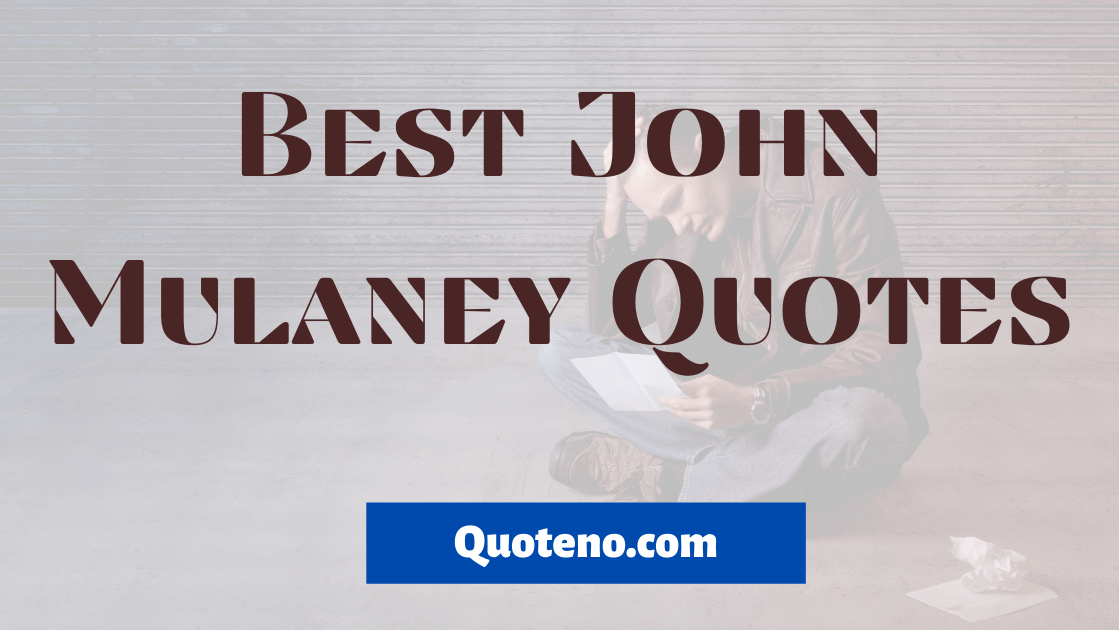 John Mulaney is an American writer, actor, producer, and standup comedian. He is in the headlines since 2008 and is best known for his performance in Saturday nightlife and his special comedy.

He was young when he entered show business in junior high instead of reports he asked their teacher with his friend to allow them to perform what they learn in the format of the skit. These john Mulaney quotes inspire you a lot.

After his graduation, he moved to new york and did hard work to pursue his dream of becoming a famous comedian. He got an office job at comedy central after few years late he was hired in the SNL writing team then he wrote some best of his iconic sketches.

Mulaney is one of the funniest and most talented comedians whether he is performing on stage or behind the scenes. He also debuts in the film industry voicing peter porker in the computer-animated film spider man into spider verse in 2018.

“You can’t always see both sides of the story. Eventually, you have to pick a side and stick with it. No more equivocating. You have to commit.”

“I do longer runs on things, a lot of stories. I really like one-liners, I like a lot of different kinds of standup but I’ve always been long-winded.”

“Things don’t exist until they exist.”

“I don’t make plans anymore. So I’m not living minute to minute.”

“You all have a relative who is an expert even though they really don’t know what they’re talking about.”

“You have the moral backbone of a chocolate éclair.”

“The more you do stuff, the better you get at dealing with how you still fail at it a lot of the time.”

“I’ll keep all my emotions right here. And then one day I’ll die.”

“I was always the squarest person in the cool room, and alternatively, sometimes the weirder person at the mainstream table.”

“I’ll book a ticket on some garbage airline. I don’t wanna name an actual airline so let’s make one up, lets’s just call it Delta Airlines.”

“My childhood was completely dominated by Bill Clinton and the OJ trial. I don’t think we had a family dinner where one didn’t come up.”

“You can do good work simply staying up all night and eating nothing but junk food, but probably not in the long term.”

“I like when things are crazy. Something good comes out of exhaustion.”

“I just watched a ton of comedy and saw a ton of different styles, and eventually you think, ‘Oh, yeah, I could be like that.”

“If you’re comparing the badness of two words and you won’t even say one of them [the n-word], that’s the worse word.”

“I kind of thought, wouldn’t it be funny to take a swing at being on the weird side of the mainstream?”

“Being president looks like the worst job in the world.”

“I quit drinking because I used to drink too much, then I would blackout, and I would ruin parties.”

“Maybe I just have high self-esteem, but I have a lot that I really enjoy.”

“I’m a very straightforward person. But that’s fine for a comedian. Because a lot of times you’re talking about everyone else.”

“In every case, I find pre-planning noble, but not always that useful in comedy. You know comedy once you’re doing it.”

“I wish I could go tell 12-year-old me like I don’t worry that you just fainted in front of all the girls, one day you’ll be able to make this into an episode of TV.”

“I am very small and I have no money. So you can imagine the kind of stress that I am under.”

“My standup persona is like I’ll heighten things, but I’m observing the world as it is in sort of a heightened emotional state.”

“I have a lot of stories about being a kid because it was the last time I was interesting.”

“I never knew you were supposed to push off of your feet when you walked. And I tried it, and I walked much faster.”

“I’m a very lucky person. I’m an idiot, and I’ve shoveled through life rather nicely so far, so I don’t feel like I deserve good treatment.”

“I’ll keep all my emotions right here. And then one day I’ll die.”

“It’s really fun to be writing and producing your own sketches. You almost have more control.”

“My vibe is like, hey you could probably pour soup in my lap and I’ll apologize to you.”

“Things have to be funny first, and if they want to have a point, that’s awesome.”

“College was like a four-year game show called “Do My Friends Hate Me or Do I Just Need to Go to Sleep?.”

“The greatest assembly of them all, once a year, was Stranger Danger. The hottest ticket in town. The Bruno Mars of assemblies.”

“As I got into high school and after puberty, I was a little more inward. I was a real extrovert when I was little, but I don’t know, I just got quieter… With my friends, I was still an extrovert.”

“If you are a school student, your opinion does not matter.”

“As I got into high school and after puberty, I was a little more inward. I was a real extrovert when I was little, but I don’t know, I just got quieter With my friends, I was still an extrovert.”