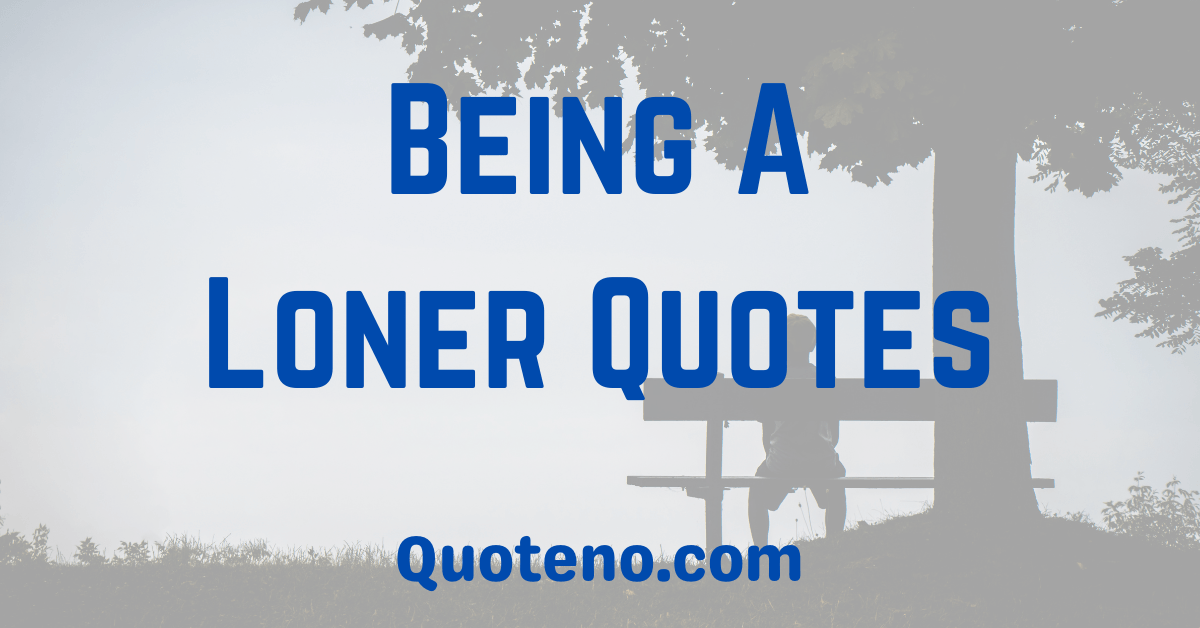 All famous people like leaders and celebrities have taught us how being a loner and walking alone can bring a positive change in someone’s life. If you enjoy your life being alone instead of being surrounded by people that nasty you like to give time to your opinions and ponder about life.

We define being a loner and being lonely as a loner gets pleasure and satisfaction from solitude and a lonely person doesn’t. A loner can be perfectly happy with his own company and being alone will make another completely sad and unhappy. Being a loner helps us to know ourselves and look within much deeper.

“I am completely a loner. In my head, I want to feel I can be anywhere. There is a sort of recklessness that being a loner allows me.”― Arundhati Roy
“If love and friendship makes you unhappy, try solitude.” ― Michael Bassey Johnson

The best things have always come from the loneliest people.” — Adam Gnade

“I’ve always been kind of a loner. Continue to be.” — Benjamin McKenzie

“Solitude matters, and for some people, it is the air that they breathe.” — Susan Cain

“I finally went where everyone goes and I realized I was never missing out.” — Meraaqi

Those who understand the true nature of humanity are always loners.” — Dean Cavanagh

“To be left alone is the most precious thing one can ask of the modern world.” — Anthony Burgess

“My alone feels so good, I’ll only have you if you’re sweeter than my solitude.” — Warsan Shire

“I’d never chosen to be alone, but that was the way things had turned out, and I’d grown used to it.” — Sebastian Faulks

“Everybody likes to see the loner hitched. It tells them everything is right with the world.” — Philip O Ceallaigh

“Many people suffer from the fear of finding oneself alone, and so they don’t find themselves at all.” — Rollo May

“Dreams have only one owner at a time. That’s why dreamers are lonely.” — Erma Bombeck

“Being a loner doesn’t make you lonely, but being lonely can make a loner” — Eiro Silvigne

“You might be an introvert if you were ready to go home before you left the house.” — Criss Jami

“They say isolation drives you crazy. Sure it does – when you can’t get enough of it.” — Anneli Rufus

“I was told I was dangerous…I asked why, and their response was “because you don’t need anyone.”

Yes, I guess you could say I am a loner, but I feel more lonely in a crowded room with boring people than I feel on my own.” — Henry Rollins

“I think it’s good for a person to spend time alone. It gives them an opportunity to discover who they are and to figure out why they are always alone.” — Amy Sedaris

“I accepted the face that as much as I want to lead others, and love to be around other people, in some essential way, I am something of a loner.” — Arthur Ashe

“Reading requires a loner’s temperament, a high tolerance for silence, and an unhealthy preference for the company of people who are imaginary or dead.” — David Samuels

“One of the many advantages of being a loner is that often there’s time to think, ponder, brood, meditate deeply, and figure things out to one’s satisfaction.” — Andrea Seigel

“A man can be himself alone so long as he is alone … if he does not love solitude, he will not love freedom; for it is only when he is alone that he is really free.” — Arthur Schopenhauer

“One of the many advantages of being a loner is that often there’s time to think, ponder, brood, mPeople who want to be famous are really loners. Or they should be.” — Katharine Hepbur

“I like weird people. The black sheep, the odd ducks, the rejects, the eccentrics, the loners, the lost and forgotten. More often than not, these people have the most beautiful souls.”

“I guess I’m pretty much of a lone wolf. I don’t say I don’t like people at all but, to tell you the truth I only like it then if I have a chance to look deep into their hearts and their minds.” — Bela Lugosi

“Deep in my heart I know I am a loner. I have tried to blend in with the world and be more sociable, but the more people I meet the more disappointed I am, so I’ve learned to enjoy myself, my family, and a few good friends.”

“We entrepreneurs are loners, vagabonds, troublemakers. Success is simply a matter of finding and surrounding ourselves with those open-minded and clever souls who can take our insanity and put it to good use.” — Anita Roddick

Best Famous Quotes About Being A Loner

“I am completely a loner. In my head, I want to feel I can be anywhere. There is a sort of recklessness that being a loner allows me.” ― Arundhati Roy

“Sometimes it is necessary to be lonely in order to prove that you are right.” — Vladimir Putin

“Solitude is the great teacher, and to learn its lessons you must pay attention to it.” ― Deepak Chopra

“I like silence; I’m a gregarious loner and without the solitude, I lose my gregariousness.” ― Karen Armstrong

“To be left alone is the most precious thing one can ask of the modern world.” ― Anthony Burgess

“I do feel like a loner but I think it’s because I look at things differently than other people.” ― Ricky Williams

“I owe everything that I have done to the fact that I am very much at ease being alone.” ― Marilynne Robinson

“The more powerful and original a mind, the more it will incline towards the religion of solitude.” ― Aldous Huxley

“But there are no loners. No man lives in a void. His every act is conditioned by his time and his society.” ― William Manchester

“Whosoever is delighted in solitude is either a wild beast or a god.” ― Aristotle

“You cannot be lonely if you like the person you’re alone with.” ― Wayne W. Dyer

“The best remedy for those who are afraid, lonely or unhappy is to go outside, somewhere where they can be quiet, alone with the heavens, nature and God. Because only then does one feel that all is as it should be.” — Anne Frank

“A lot of times the characters I play tend to be kind of loners or they don’t have best friends or best buddies.” ― Michael Shannon

“Be a loner. That gives you time to wonder, to search for the truth. Have holy curiosity. Make your life worth living.” ― Albert Einstein

“Although I am a typical loner in my daily life, my awareness of belonging to the invisible community of those who strive for truth, beauty, and justice has prevented me from feelings of isolation.” ― Albert Einstein

“I am completely a loner. In my head, I want to feel I can be anywhere. There is a sort of recklessness that being a loner allows me.” ― Arundhati Roy

“It’s the journey of the self, I guess. You start with this kind of a loner, outside guy, which a lot of people can relate to, and he goes out into the world.” ― Keanu Reeves

“The loner who looks fabulous is one of the most vulnerable loners of all.” ― Anneli Rufus

“I’m very much a loner. I don’t like long relationships with people and I always keep people at a distance.” ― Anthony Hopkins

“Most of the time I played by myself. Even then I was a loner, and I have stayed a loner all my life. It can make a man seem a little distant or even aloof – but it has helped pull me through some tight spots and hard times.” ― Roy Wilkins

“The best adventures are embarked on alone.” ― Lidia Longorio

“I am never less alone than when alone.” — Cicero

“Alone is what I have. Alone protects me.” — Sherlock

“I am a loner, who does not want to feel lonely.”

“I enjoy being alone, my soul is at peace in the silence.”

“Solitude is the best nurse of wisdom.” — Laurence Sterne

“And in the end, all I learned was how to be strong Alone.”

“You only grow when you are alone.” — Paul Newman

“Seclusion is the price of greatness.” — Paramahansa Yogananda