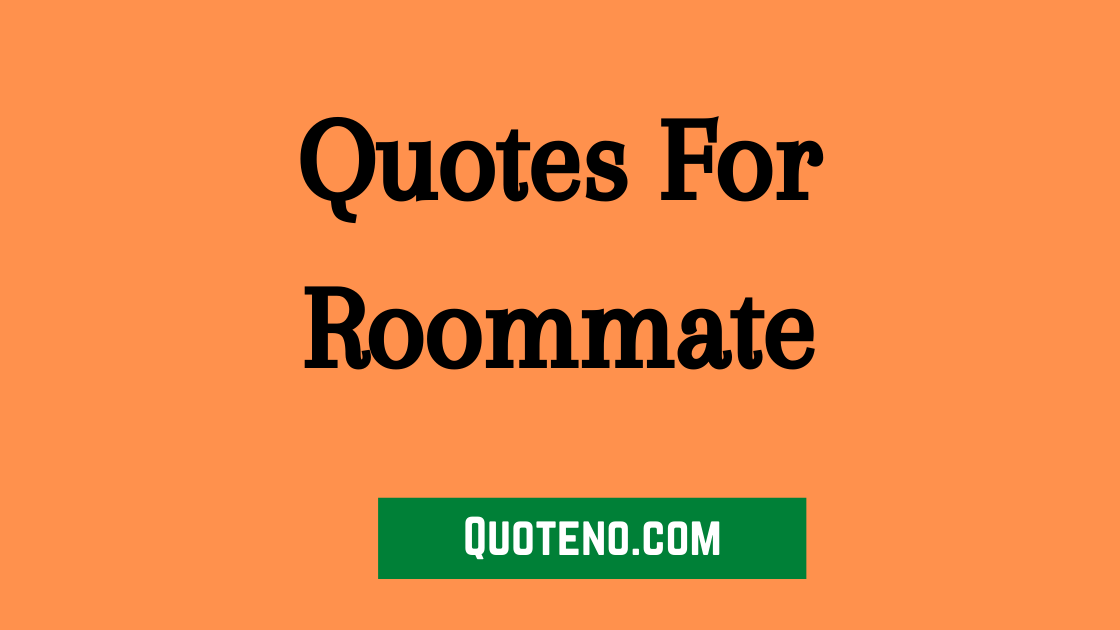 Best roommate quotes and sayings with images. A roommate is a person with whom we share our room or living facility. if you are looking for roommate captions then you are in right place.

Hostel life is a common term for college life in hostels. This lifestyle demands that you live with a number of people, share the same bathroom and cook your own meals.

Living hostel life requires low-budget accommodation but it helps to save money when compared to other types of student accommodations such as apartments or houses.

It is the right time to enjoy your life when you have a cute roommate who is trying to improve his/her lifestyle by sharing with everyone what he or she has learned from their personal experiences.

His advice could help others make better decisions in finding the right roommate for them and living a more meaningful life.

Missing a roommate is a second terrible feeling because he is our extra pair of hands. Share these quotes with your ex-roommates or those you missing this time. you can use them on Facebook, and Instagram posts.

Below you will find our collection of wise, humorous, inspirational, funny, hostel roomies quotes. use them in WhatsApp status or in the Instagram caption.

“Dear roommate, I never saw you as a trustworthy person, but still, I ended up giving you my room key anyways.”

“I once had a roommate who would sit on the couch and eat Cheetos with socks in both hands because he was afraid the orange color would permanently dye his fingers. ” ― Christopher Hyer via Twitter

“Finding the right roommate makes everyday feel like a sleepover with your best friend.”

“I look at my roommates who are so proud of me that it makes me proud.” ― Adriana Trigiani

“I’m not the easiest person to live with. I’m kind of a slob. ”― Katie Holmes

“That Midnight Maggi won’t taste as good without you. Although I won’t get to eat most of it, with you! Hogger and the Chronicles of Stolen Maggi!”

“My roommate insisted we push our twin beds together for more space in our dorm. The first night sleeping right next to each other he told me about how he thinks he is possessed by a demon.”  ― Matt Frye via Twitter

“I have the best roommates in the world! It creates a fun sense of family… and that’s really important to me. Things can get so lonely without it.” ― Kristen Bell

“Please don’t be that roommate who leaves just a little toilet paper so they don’t have to be the one to get a new roll.” ―  Alejandro Hernandez via Twitter

“Whenever I make spaghetti, I always make a few extra noodles because my roommate loves to eat them two or three hours later when they are cold and stuck to the strainer.” ― Molly Wilson via Twitter

“I’ve got four roommates and they all have fur and tails.” ― Kate Walsh

“I’m surrounded by people who care about me and love me. I have a great job and wonderful roommates who take care of me. I have a family who adores me.” ― Evangeline Lilly

“Oh great my roommate left just enough water in the Brita pitcher to inspire me to throw a banana at her head.” ― Amber Tozer, via Twitter

“The hardest part of having a roommate is convincing them that it’s normal for their orange juice & shampoo to suddenly run out twice as fast. ”― Ali Spagnola via Twitter

“My roommate just told my other roommate that she’s the worst roommate ever. That puts me in the clear!!.Fraidy.” ― Bleedstich via Twitter

“My favorite part of working from home is when my roommate doesn’t realize I’m here and I get to hear her telling my cats she’s their real mom.” ― Anna Borges via Twitter

“My roommate says, “I’m going to take a shower and shave. Does anyone need to use the bathroom?” It’s like some weird quiz where he reveals the answer first.” ― Mitch Hedberg

“Roommate has a date coming by later and asked me to clean [because] he’s not home. So I made a Princess D shrine in his room. ” ― Deno DeMartino via Twitter

“I wouldn’t want to be someone’s roommate, that’s for sure. You can’t do certain things, you can’t leave the bathroom door open…you can’t put your feet on the couch, you can’t hide stuff on the couch. ”― J. B. Smoove

“I had a roommate that showered with his clothes on because apparently using the washing machine was too expensive.”― Will McCollister via Twitter

“Felt bold. Walked naked to the bathroom. My roommate & his friends got home & are in the living room. Yes, I’m stuck naked in the bathroom. ”― Anthony Troli via Twitter

“A good roommate may be the single most important thing to have when one is away at school. ”― Barbara Dana

“Good relationships make people happy, and happy people enjoy more and better relationships than unhappy people… Conflicts in relationships–having an annoying office mate or roommate, or having a chronic conflict with your spouse–is one of the surest ways to reduce your happiness. You never adapt to interpersonal conflict; it damages you every day, even days when you don’t see the other person but ruminate about the conflict nonetheless.” ― Jonathan Haidt

“My roommate and I share a great bond because I’m awesome, and opposites attract.”

“Living with roommates has drama, fun, happiness, sadness, fights and is a mixed bag, but I wouldn’t trade it for anything else.”

“Some people may not take the roommate contracts seriously.” ― Jack Ellis

“I hope you enjoy your very special day today, roomie!”

“I have two roommates, so it’s a challenge to keep the house the way I like.” ― Evangeline Lilly

“The best day is when it is your roommate’s turn to do the chores.”

“My roommate got a pet elephant. Then it got lost. It’s in the apartment somewhere.” ― Steven Wright

“I really like to put my name on everything, so my roommate doesn’t steal it. It’s really a throwback to that.” ― Jon Stewart

“Finding the right roommate makes every day feel like a sleepover with your best friend.”

“Having a roommate like you has made even the saddest nights better and turned tears into bursts of laughter.”

“My first college roommate greeted me with a shocked silence followed by, ‘So. . .you’re black.” ― Al Roker

“I had this roommate in college who would get up almost 2 hours before class to do hair and makeup. That’s not for me.” ―Kim Raver

“Our ‘keep calm and vent to your roommate’ moment! Or should I say ritual?”

“My friend’s roommate wouldn’t help split the cost of toilet paper so they chose to buy their own and not give her any, so she got mad at them and pooped on the floor and refused to clean it up. ”― Chloe Skogland via Twitter

“You know, Talon. Towels look really good on you. You go outside like that and you’ll start a whole new fashion craze. (Sunshine) Do you always say everything that comes to your mind? (Talon) Mostly. I do have some thoughts I keep to myself. I used to not care and would say anything at all, but then one time my college roommate called the psycho unit on me. You know, they really do have white coats.” ― (Sunshine) Sherrilyn Kenyon

“My college roommate is an exchange student from Brazil and her English is still a little rough. On the opening night of my first college theater production, she ran up to me, hugged me, then shouted, ‘I hope you break your legs!’.” ―  Anna Fruechting via Twitter

“Can never forget you, you know? It’s hard to forget someone who leaves their clothes all over the room.”

“I’m a typical college girl; I love to shop and gossip with my roommates about boys and whatnot.”― Alicia Sacramone

“Having a roommate is like having an extra pair of hands, an extra brain to think but most of all, an extra closet to choose from!” ”

“Everyone has this universal understanding of roommate drama.”―Leighton Meester

“I have a roommate, and I signed a year lease. I screwed up! That’s like I wrote a joke that didn’t work, but now I have to tell it for a year. ”―Mitch Hedberg

“I like cinnamon rolls, but I don’t always have time to make a pan. That’s why I wish they would sell cinnamon roll incense. After all, I’d rather light a stick and have my roommate wake up with false hopes.” ―Mitch Hedberg

“Even a little self-control can save you a lot of times really hard to be roommates with people if your suitcases are much better than theirs.”―J. D. Salinger

“Know you got a roommate, call me when it’s no one there. Put the key under the mat and you know I’ll be over there.” ― Drake (quotes on roommate)

“My roommate just finished her 1.5-hour shower and apologized, saying it was ‘too therapeutic.’ Honestly, actual therapy would be cheaper.”―Jules Suzdaltsev via Twitter

“From being strangers to roomies and homies! We have our own little happily ever after!”

“Sure your boyfriend texts you ‘Good morning‘ and ‘Goodnight’ every day, but my roommate says ‘Sup’ when he finally emerges from his room/lair to use the bathroom and then ‘See ya’ when he leaves for work 15 minutes later.”     ― Jenny Hart via Twitter

“I don’t need to pay a therapist to give me crap. I have a roommate that does it for free. ”―Ally McBeal

“I once had a roommate who got so mad at everyone’s dirty dishes that he bought his own set of silverware and wrote his name on every fork, spoon, and knife.”  ― Jimmy Fallon via Twitter

“I remember every midnight craving. I may be getting angry at the time when you steal my food, but now I’m seriously missing you, mate.”