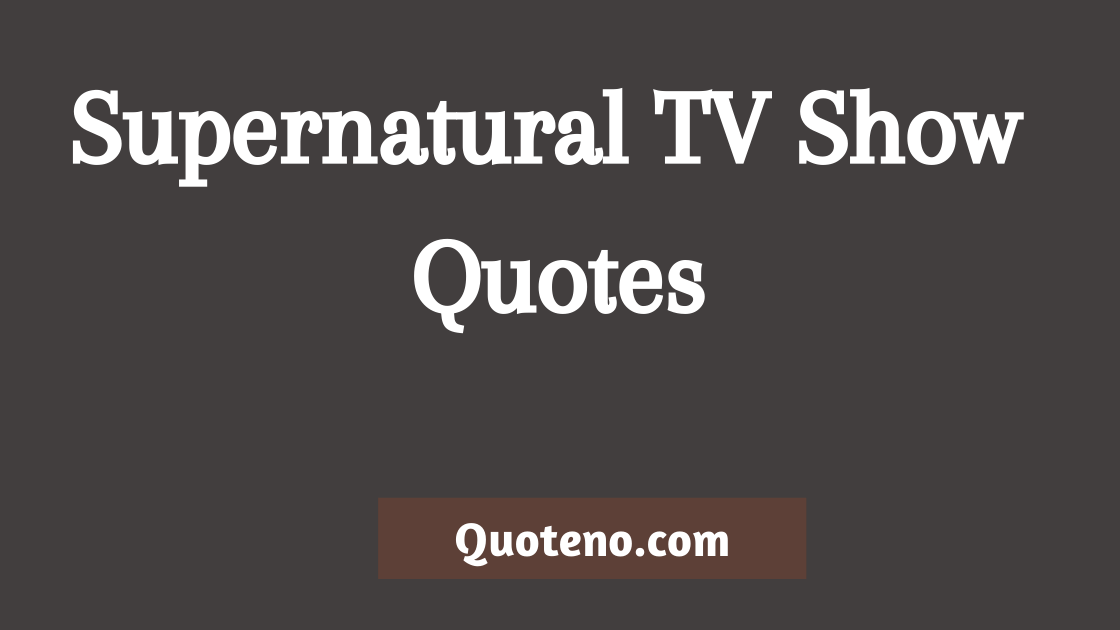 Supernatural is another famous American television series produced by Eric Kripke. The series follows the two brothers as they hunt ghosts, monsters, demons, and other supernatural beings. They followed their dad and solved the mystery of their mother’s strange death.

This series was first broadcast on September 13, 2005, and successfully completed its 15 impressive seasons. There are countless thrills, suspense, and twists in it. These supernatural quotes could keep your mind turning every day.

We have compiled the list of Inspirational quotes from supernatural tv shows and contain the lines of your favorite characters dean, Castiel, and sam.

“We didn’t lie. We just avoided certain truths to manipulate you.”

“Must be hard, with your sense of direction. Never being able to find your way to a decent pick-up line.”

“If you’re gonna make an omelet, sometimes you have to break some spines.” — Crowley

“You’re changing the world, and I want to be a part of it.”

“Everybody judges, all the time. Now, you got a problem with that, you’re living wrong.”

“Boy, you put your foot on my coffee table, I’m ‘a whack you with a spoon!”

“The old Death thought it was funny. But now there’s one hard, fast rule in this Universe: what lives, dies. So the next time you or your brother bite it, well, you’re not going to Heaven or Hell. One of us—and, Lord, I hope it’s me—we’re gonna make a mistake and toss you out into the Empty. And nothing comes back from that.”

“If anybody is going to sit on Ryan Gosling’s face it’s going to be me.”

“Some ground rules: No slaughtering each other. Curb your wrath. Oh, and uh, keep your hands off the local virgins; we’re trying to keep a low profile here.” — Baldur

“As far as we’re concerned you just declared war. And this is what war looks like. It has casualties.”

“A wise man once told me, ‘family doesn’t end in blood.’ But it doesn’t start there either. Family cares about you, not what you can do for their family’s there; for the good, bad, all of it. They got your back, even when it hurts. That’s family. That sounds like your mother?”

“Details are everything! You don’t want to go fighting ghosts without any health insurance.”

“What’s done is done. All that matters now, all that’s ever mattered, is that we’re together. So shut up and drink your beer.”

“Well, there’s pretty much what we do know, that they screwed with financial markets, they helped Hitler get started, along with god knows what else—probably disco.”

“You’re gonna wipe out a whole town for one little witch. Sounds to me like you’re compensating for something.”

“I’m not looking at you like anything. Though I gotta say, you do look like crap.“Dean Winchester

“I think the world’s gonna end bloody. But it doesn’t mean we shouldn’t fight. We do have choices. I choose to go down swinging.”

“Well, the problem with the snake is that it has a thousand heads. Evil btches just keep piling out of the Volkswagen.”

“The universe is trying to tell us something we both should already know. We’re stronger together than apart.”

“We’re going to fight or make out, ’cause I’m getting some real mixed signals here.”

“Check the freezer. Maybe there are some human hearts behind the Häagen-Dazs or something.”

“We are a family. I’d do anything for you. But things will never be the way they were before.”

“There’s a lot of folklore about mirrors — that they reveal all your lies, all your secrets, that they’re a true reflection of your soul, which is why it’s bad luck to break them.”

“I’m not gonna live this life forever. Dean, when this is all over, you’re gonna have to let me go my own way”

“I’m not gonna live this life forever. Dean, when this is all over, you’re gonna have to let me go my own way.”

“I’ve got demon blood in me, Dean. This disease is pumping through my veins, and I can’t ever rip it out or scrub it clean. I’m a whole new level of freak! And I’m just trying to take this — this curse… and make something good out of it. Because I have to.”

“If you murder a monster in monster heaven, where does it go?”

“You know this world, this sad, doomed little world, it needs you. It needs every last it can get, and I won’t let you die, I won’t let any of you die.”

“A hunter’s memorial complete with a monster. Mary would’ve appreciated that”

“Every soul here is a monster. This is where they come to prey upon each other for all eternity.”

“I’m hapless, I’m hopeless, I mean, why the hell not bury myself in women and decadence? Right? It’s the end, baby! That’s what decadence is for. Why not bang a few gongs before the lights go out?”

“Don’t make things needlessly complicated as you humans tend to do.”

“Boy, three bedrooms, two baths, and one homicide. This place is gonna sell like hotcakes.”

“Well Dear, If You Can’t Stand The Heat, Stay Out Of Hell.”

“Mom! You’ve Got To Stop Drowning Me In Holy Water Every Time I Go Out!.”

“What You Guys Call The Apocalypse, I Used To Call Sunday Dinner.”