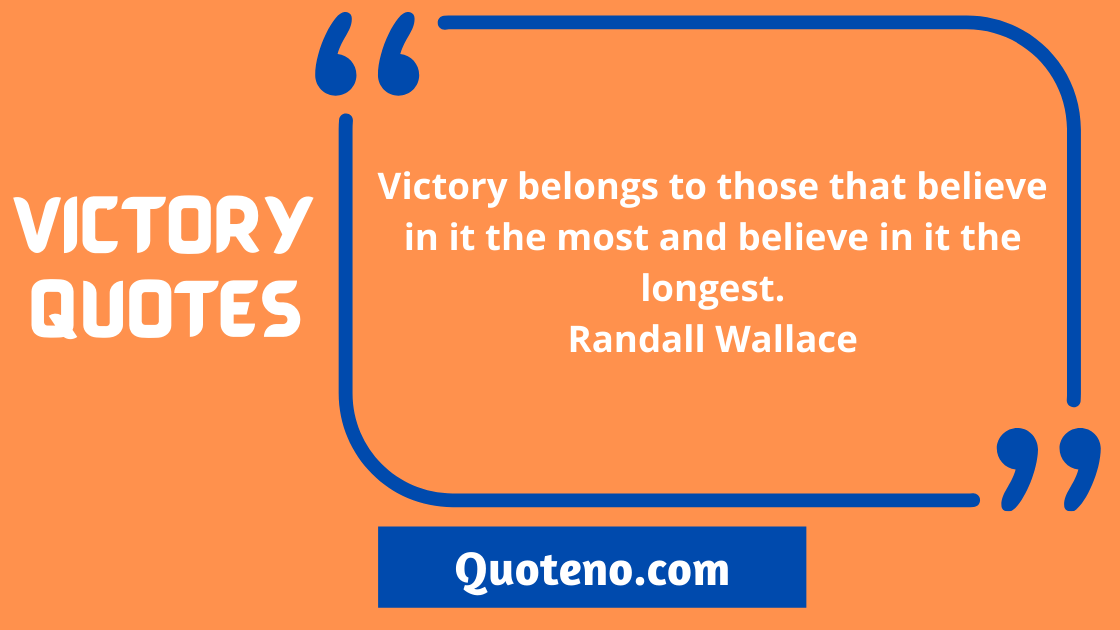 Famous victory quotes and sayings with beautiful images. we compiled the best victory quotes available on the internet. After reading these victorious quotes about winning you will gain energy and inspiration.

Everyone loves to win. The victory gives a fearless feeling that allows the winner to appear at the top after the hard work, discipline, and dedication he has done. These inspirational quotes on victory motivate your next win.

Share these winning quotes with your family members friends and on social media also. you can use them as a WhatsApp status.

“Anyone can deal with victory. Only the mighty can bear defeat.” ― Adolf Hitler

“Where there is unity there is always victory.” – Publilius Syrus

“Victory is in the quality of the competition, not just the final score.” – Mike Marshall

“The supreme art of war is to subdue the enemy without fighting.” ― Sun Tzu

“The secret of all victory lies in the organization of the non-obvious. – Marcus Aurelius Victory comes only to those prepared to make it, and take it.” – Tom Clancy

“Victory is about recognizing all the work that went into achieving your dream. ” – Tommy Hilfiger

“Whenever you are confronted with an opponent. Conquer him with love.” ― Mahatma Gandhi

“Each victory with God can bring a reassurance once more that the ones born of God are victorious.” – Sunday Adelaja

“Sometimes the prize is not worth the costs. The means by which we achieve victory are as important as the victory itself.”― Brandon Sanderson

“Victory is always possible for the person who refuses to stop fighting.” – Napoleon Hill

“The problems of victory are more agreeable than those of defeat, but they are no less difficult.” – Winston Churchill

“You cannot expect victory and plan for defeat.” ― Joel Osteen

“The great victory, which appears so simple today, was the result of a series of small victories that went unnoticed.” – Paulo Coelho

“Be ashamed to die until you have won some victory for humanity.” ― Horace Mann

“Victory usually goes to the army who has better-trained officers and men.” – Sun Tzu

“It’s a story about the victory that will touch the lives of everyone who watches it. It’s powerful.” – Derek Luke

“Victory belongs to the most persevering.” – Napoleon Bonaparte

“The moment of victory is much too short to live for that and nothing else.” – Martina Navratilova

“There was a saying that a man’s true character was revealed in defeat. I thought it was also revealed in victory.” ― Alison Goodman

“Victory takes sides on people who are more compatible with nature and the future.” – Toba Beta

“Victory is won not in miles but in inches. Win a little now, hold your ground, and later, win a little more.” – Louis L’Amour

“The fight isn’t over until you win.” ― Robin Hobb

“The greatest victory a man can win is victory over himself.”– Johann Heinrich Pestalozzi

“Victory in physical battles requires strength, muscles, and skill; but the fight is never tougher and victory is never sweeter than in the battles over self.”– John Bytheway

“The first and greatest victory is to conquer yourself; to be conquered by yourself is of all things most shameful and vile.” – Plato

“The victory of success is half won when one gains the habit of setting goals and achieving them.” – Og Mandino

“Once you hear the details of victory, it is hard to distinguish it from a defeat.” ― Jean-Paul Sartre

“The first place we must win is in our own minds. If you don’t think you can be successful, then you never will be.” – Joel Osteen

“This victory alone is not the change we seek; it is only the chance for us to make that change.” – Barack Obama

“Victory is akin to ecstasy. It takes us past the limits of our ordinary happiness, while it also lets a sometimes vulgar lust for winning keep us company.” – D.S. Carroll

“The best victory is when the opponent surrenders of its own accord before there are any actual hostilities…It is best to win without fighting.” – Sun Tzu

“Yes, victory is sweet, but it doesn’t necessarily make life any easier the next season or even the next day.” – Phil Jackson

“Your victory is right around the corner. Never give up.” – Nicki Minaj

“Victory isn’t defined by wins or losses. It is defined by effort. If you can truthfully say, ‘I did the best I could, I gave everything I had,’ then you’re a winner.” – Wolfgang Schadler

“One victory more or less doesn’t make the difference for me now.” – Hermann Maier

“Victories that are easy are cheap. Those only are worth having which come as the result of hard fighting.” – Henry Ward Beecher

“The only victories which leave no regret are those which are gained over ignorance.”– Napoleon Bonaparte

“The victory over our inner self is a daily struggle. Be strong and do not give up.” – Lailah Gifty Akita

“Victory has a hundred fathers and defeat is an orphan.” ― John F. Kennedy

“Every win, regardless of a good or bad one, gives you more confidence.” – Mike Tyson

“Victory is much more meaningful when it comes not just from one person but from the joint achievements of many.” – Howard Schultz

“If you can accept losing, you can’t win.” – Vince Lombardi

“There always comes a time in life where you can either give up or step up.” ― Graeme Rodaughan

“All victories breed hate, and that over your superior is foolish or fatal.” – Baltasar Gracian

“The more difficult the victory, the greater the happiness in winning!.” –Unknown

“You can’t win unless you try to win, but you can lose by trying not to lose.” ― Jack Campbell

“Victory is the beautiful, bright-colored flower. Transport is the stem without which it could never have blossomed.” – Winston Churchill

Winning is like deodorant – it comes up and a lot of things don’t stink. Doc Rivers

In order to start winning, we have to stop losing. Emmanuel Arceneaux

Winning is overrated. The only time it is really important is in surgery and war. Al McGuire

I knew I had to win today, otherwise, she would have beaten me. Heather Watson