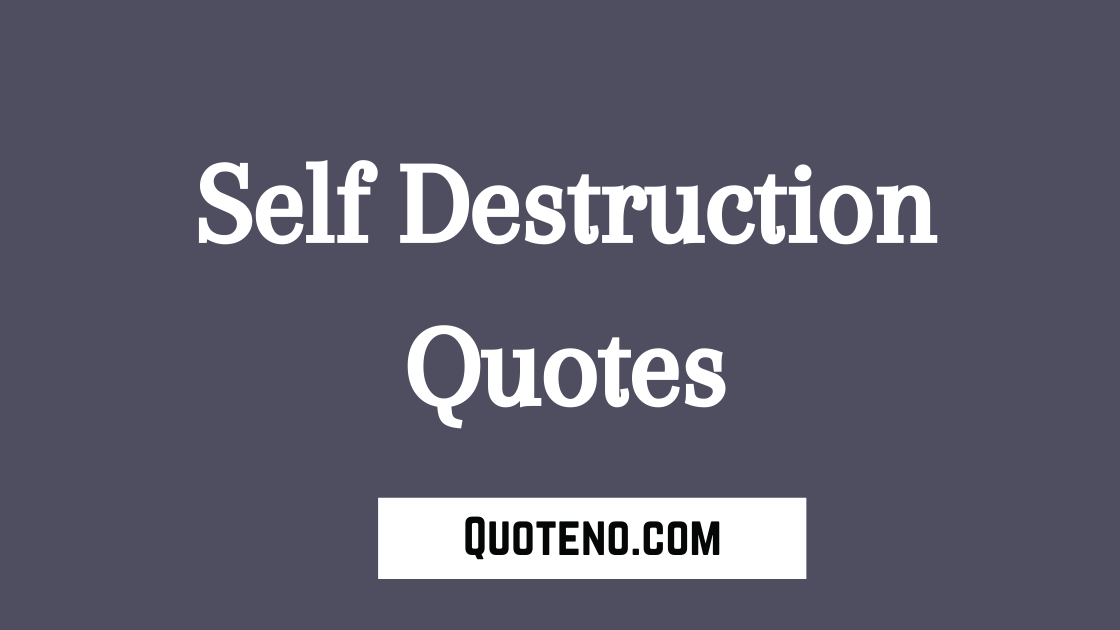 Explore the below self-destruction quotes and don’t forget to share them with your family, friends, and on social media.

“Self-conceit may lead to self-destruction.” ― Aesop

“In order to understand, I destroyed myself.” ― Fernando Pessoa

“There’s something very romantic about self-destruction and sabotaging your life, and taking a hammer to it.” ―Gerard Way

“Self-destruction is the effect of cowardice in the highest extreme.” ― Daniel Defoe

“Be the flame, not the moth.” ― Giacomo Casanova

“Frustration, discouragement, and depression mean you are working against yourself.” ― Jaggi Vasudev

“Often, our immediate reaction to a sudden crisis helps us save ourselves. Our response to gradual crises that creep up upon us, on the other hand, maybe so adaptive as to ultimately lead to self-destruction.” ― Amish Tripathi

“Guilt is really the reverse side of the coin of pride. Guilt aims at self-destruction, and pride aims at the destruction of others.” ― Bill W.

“The price of dishonesty is self-destruction.” ― Rita Mae Brown

“Survival of the fittest can take us only so far; competition and aggression have brought us to the brink of self-destruction. What is needed now is the survival of the wisest. You can participate in this shift by expanding your own awareness.” ― Deepak Chopra

“I wonder what’s wrong with me. Sometimes I just keep wanting to go deeper and deeper into the world of self-destruction. Like as if I want to see myself fail completely and disappear.” ― Daul Kim

“Sometimes we want what we want even if we know it’s going to kill us.” ― Donna Tartt

“Many have dreamed up republics and principalities that have never in truth been known to exist; the gulf between how one should live and how one does live is so wide that a man who neglects what is actually done for what should be done learns the way to self-destruction rather than self-preservation.” ― Niccolo Machiavelli

“I will no longer mutilate and destroy myself in order to find a secret behind the ruins.” ― Hermann Hesse

“Be led by your talent, not by your self-loathing; those other things you just have to manage.”― Russell Brand

“There are seeds of self-destruction in all of us that will bear only unhappiness if allowed to grow.” ― Dorothea Brande

“Well, love is insanity. The ancient Greeks knew that. It is the taking over of a rational and lucid mind by delusion and self-destruction. You lose yourself, you have no power over yourself, you can’t even think straight.” ― Marilyn French

“We will bankrupt ourselves in the vain search for absolute security.” ― Dwight D. Eisenhower

“The quickest path to self-destruction is to push away the people you love.”― Cassia Leo

“The human body is not a thing or substance, given, but a continuous creation. The human body is an energy system that is never a complete structure; never static; is in perpetual inner self-construction and self-destruction; we destroy in order to make it new.” -Norman O. Brown

“My default is self-destruction, and anything on top of that is a bloody lot of work.” -Gillian Anderson

“When you don’t work together you can’t emerge as a force. It becomes what some call a “lonely struggle” and individual self-destruction.” -Haile Gerima

“I never ever ran from the Ku Klux Klan, and I shouldn’t have to run from a black man.” –Kool Moe Dee

“When the ego dominates in organizations, even spiritual organizations, there is usually a big drama or upheaval of some kind, and self-destruction begins.” -Eckhart Tolle

“When we don’t put the brakes on our self-absorption, we have nothing stopping us from total self-destruction. We become the fruits of our actions.” -Zeena Schreck

“Those who pray for your downfall are concentrating negative thoughts towards you, without taking cognizance of the slippery ground in which they are standing, which could lead to their downfall.” ― Michael Bassey Johnson