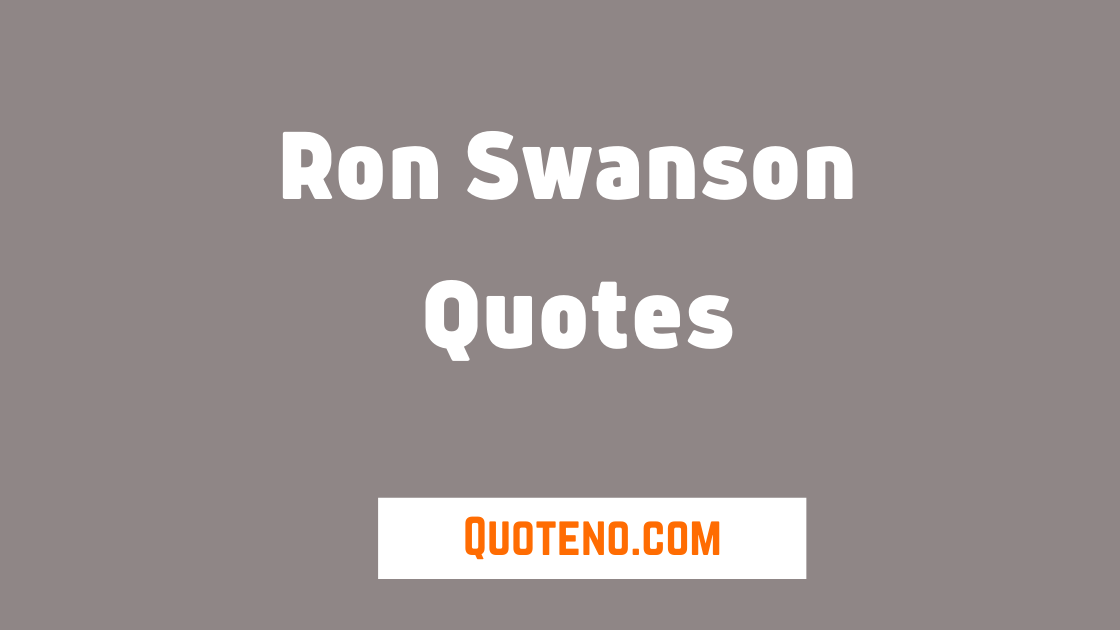 Ron Swanson quotes and sayings with images. If you are a fan of the Swanson character then these Ron Swanson quotes to live by more integrity. Maybe it’s his obvious contempt for the American government, his expertise in woodworking, or his never-ending adoration of meat and drink.

Ron Swanson (Ronald Ulysses Swanson) is a fictional character in the comedy television series Parks and Recreation on NBC portrayed by Nick Offerman.

Explore a hilarious and memorable collection of the Best Ron Swanson quotes about love, meat, salad, funny, and breakfast.

“When people get a little too chummy with me, I like to call them by the wrong name to let them know I don’t care about them.

“There are only three ways to motivate people: money, fear, and hunger.”

Ron: “I suffer from a disorder called ‘sleep fighting.'” Leslie: “That must be terrible.” Ron: “Only when I’m losing.”

“Under my tutelage, you will grow from boys to men. From men into gladiators. And from gladiators into Swansons.”

“Friends: one to three is sufficient.”

“You choose a thankless job. You can’t be upset when nobody thanks you. Don’t start chasing applause and acclaim. That way lies madness.”

” Live your life how you want, but don’t confuse drama with happiness.”

“Capitalism: God’s way of determining who is smart and who is poor.”

“If any of you need anything at all, too bad. Deal with your problems yourselves, like adults.” — Ron Swanson quote

“America: The only country that matters. If you want to experience other ‘cultures,’ use an atlas or a ham radio.”(ron swanson quotes about america)

“Great job, everyone. The reception will be held in each of our individual houses, alone.”

“You’ve fallen into a classic trap, Christopher: trying to fix a woman’s problems instead of just listening to what they are.”

“I’ve cried twice in my life. Once when I was 7 and hit by a school bus. And then again when I heard that Li’l Sebastian had passed.”

“You had me at ‘Meat Tornado.”

“Fishing is for sport only. Fish meat is practically a vegetable.”

“Barbecues should be about one thing: good shared meat.”

“Fishing relaxes me. It’s like yoga, except I still get to kill something.”

Leslie: “Why would anybody ever eat anything besides breakfast food?”

“Dear frozen yogurt, you are the celery of desserts. Be ice cream, or be nothing.”

“Breakfast food can serve many purposes.”

“I am submitting this menu from a Pawnee institution, J.J.’s Diner. Home of the world’s best breakfast dish: The Four Horsemeals of the Eggporkalypse.”

“I’m a simple man. I like pretty, dark-haired women and breakfast food.”

“Strippers do nothing for me…but I will take a free breakfast buffet anytime, anyplace.”

“ There has never been a sadness that can’t be cured by breakfast food.”

There’s only one thing I hate more than lying: skim milk. Which is water that’s lying about being milk.”

“Crying is acceptable at funerals and the Grand Canyon. Keep your tears in your eyes where they belong.”

“Don’t teach a man how to fish and feed yourself. He’s a grown man and fishing is not that hard.”

“Hey, Mark. This is Beth, my ex-wife Tammy’s better-looking sister.”

“Best of luck but I believe luck is a concept created by the weak to explain their failures.”

“There has been a mistake. You’ve accidentally given me the food that my food eats.”

“Dogs under 50 lbs are cats and cats are pointless.”

“I call this turf ‘n’ turf. It’s a 16-ounce T-bone and a 24-ounce porterhouse. Also, whiskey and a cigar. I am going to consume all of this at the same time because I am a free American.”

“Body grooming: Only women shave beneath the neck.”

“I once worked with a man for three years and never got to know his name. The best friend I ever had. We still never talk sometimes.”

“If there were more food and fewer people, this would be a perfect party.”

“Would I like some salad? Since I am not a rabbit, no. I do not.” (Ron Swanson Quotes Salad)

“Birthdays were invented by Hallmark to sell cards.”

“The less I know about other people’s affairs, the happier I am. I’m not interested in caring about people. I once worked with a guy for three years and never learned his name. The best friend I ever had. We still never talk sometimes.”

“If you don’t believe in love, what’s the point of living?”

“I love being a father but there are a few things I miss: Silence. The absence of noise. One single moment undisturbed by the sounds of a children’s program called Doc McStuffins. There is no quiet anymore. There is only Doc McStuffins.”

“It’s always a good idea to demonstrate to your coworkers that you are capable of withstanding a tremendous amount of pain.”

I hope you enjoy the collection of quotes by Ron Swanson. Share your favorite quote in the comment section below to show your love for Swanson’s character.