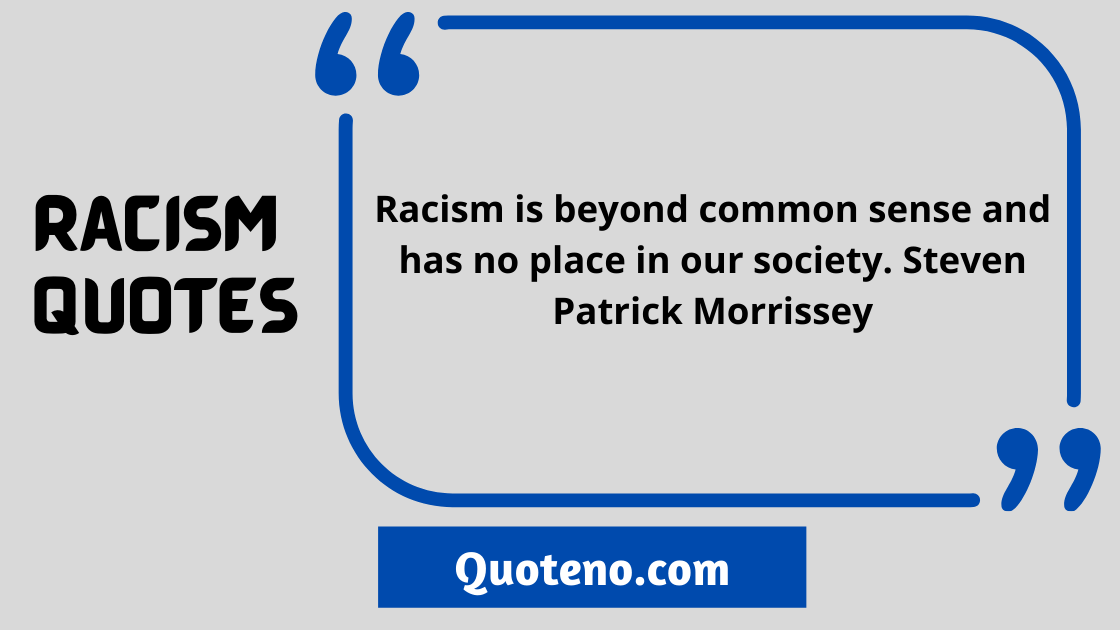 Racism Quotes and sayings with images. If you are against racism then these quotes on racism and justice are for you. These racist quotes will boost your energy to raise your voice against racism.

Sometimes you need a powerful quote to increase your energy against injustice. This is the best time when it’s evident that change is necessary to address the racial injustice that prevails all over the world.

It is the best time to share quotes about racism and injustice with you to improve your own life and make the world a better place for coming generations. you need to stop the racism around you.

Share these racist quotes with your friends, family members, and on social media or use them as a what’s app status for awareness of others and build the anti-racism concept.

“You face racism in small and large ways.” – Jayson Blair

“Racism isn’t born, folks, it’s taught. I have a two-year-old son. Do you know what he hates? Naps! End of list.” – Denis Leary

“The minute you understand racism, you’re responsible for being racist. It’s like eating from the tree of knowledge.” – Lynda Barry

“Racism is beyond common sense and has no place in our society.” – Steven Patrick  Morrissey

“Any concept of one person being superior to another can lead to racism.” – Walter Lang

“Racism is not dead. Definitely, there are these biases.” – John McWhorter

“I was raised to believe that excellence is the best deterrent to racism or sexism. And that’s how I operate my life.” – Oprah Winfrey

“Racism built me into a person that was set up to be self-destructive.” – Jayson Blair

“It is never too late to give up our prejudices.” – Henry David Thoreau

“Racism is ridiculous no matter where it’s coming from.” – Alan Ball

“Hating people because of their color is wrong. And it doesn’t matter which color does the hating. It’s just plain wrong.” – Muhammad Ali

“Racism, because it favors color over talent, is bad for business.” – Steven Pinker

“Let us all hope that the dark clouds of racial prejudice will soon pass away and that in some not too distant tomorrow the radiant stars of love and brotherhood will shine over our great nation with all their scintillating beauty.” – Martin Luther King, Jr.

“Racism, unfortunately, is part of the fabric of America’s society.” – David Scott

“In this country, American means white. Everybody else has to hyphenate.” – Toni Morrison

“Racism is a refuge for the ignorant. It seeks to divide and destroy. It is the enemy of freedom and deserves to be met head-on and stamped out.” – Pierre Berton

“No human race is superior; no religious faith is inferior. All collective judgments are wrong. Only racists make them.”– Elie Wiesel

“To like an individual because he’s black is just as insulting as to dislike him because he isn’t white.” – E. E. Cummings

“Racism is an ism to which everyone in the world today is exposed; for or against, we must take sides. And the history of the future will differ according to the decision which we make.” – Ruth Benedict

“At the heart of racism is the religious assertion that God made a creative mistake when He brought some people into being.” – Friedrich Otto Hertz

“In order to get beyond racism, we must first take account of race. There is no other way. And in order to treat some persons equally, we must treat them differently.” – Harry A. Blackmun

“Men build too many walls and not enough bridges.” ― Joseph Fort Newton

“The very serious function of racism is a distraction. It keeps you from doing your work. This keeps you explaining, over and over again, your reason for being.” – Toni Morrison

“It is not our differences that divide us. This is our inability to recognize, accept, and celebrate those differences.” – Audre Lorde

“Racism is a grown-up disease, and we should stop using our kids to spread it.”Ruby Bridges

“Prejudice is a burden that confuses the past, threatens the future, and renders the present inaccessible.” – Maya Angelou

“You are growing into consciousness, and my wish for you is that you feel no need to constrict yourself to make other people comfortable.” ― Ta-Nehisi Coates

“I think that racism is ugly and so unfair, and I believe that we all need one another.” Ruby Bridges

“Race doesn’t really exist for you because it has never been a barrier. Black folks don’t have that choice.” ― Chimamanda Ngozi Adichie

“I have a dream that one day little black boys and girls will be holding hands with little white boys and girls.” ― Martin Luther King Jr

“What is it you most dislike? Stupidity, especially in its nastiest forms of racism and superstition.” ― Christopher Hitchens