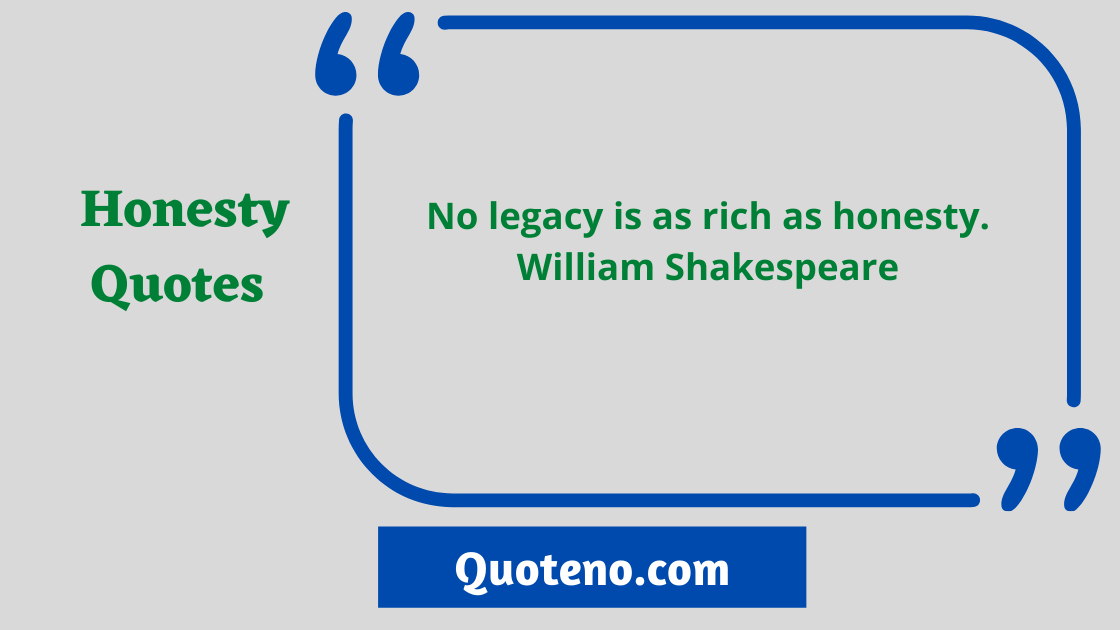 Best honesty quotes and sayings with eye-catching images. Below is our latest collection of quotes on honesty. After reading you will feel the positive energy in your life.

Honesty means doing anything that is morally right. If anyone is honest it means he is trustworthy, sincere, truthful, fair, and loyal. Remember the more honest you are, the more confidence and self-respect you will gain.

By being honest you are doing good for yourself because you are speaking the truth. Speaking with truthfulness raises your moral character and gains the trust of others.

If you want to be an honest person then change yourself first. May these quotes about honesty will help you to realize that adopting this positive characteristic to yourself is always better in a lot of ways in life.

Share these famous honest sayings with your friends family members and on social media or use them as a WhatsApp status.

“Honesty has a power that very few people can handle.”  – Steven Aitchison

“The first step is, to be honest, and then to be noble.” – Winston Churchill

“No legacy is as rich as honesty.” – William Shakespeare

“Honesty prospers in every condition of life.” – Friedrich Schiller

“If it is not right do not do it; if it is not true do not say it.” – Marcus Aurelius

“Honesty is the fastest way to prevent a mistake from turning into a failure.” – James Altucher

“A clear conscience is more valuable than wealth.” – Tagalog Proverb

“There is one way to find out if a man is honest – ask him. If he says ‘yes, you know he is crooked.” – Groucho Marx

“From the fullness of the heart, the mouth speaks.” – Jesus Christ

“The contented person can never be ruined.” – Chinese Proverb

“Be honest in your life it creates positive energy, stopping all unfairness through life.” Fathima Bibi Joosab

“Following the path of least resistance is what makes both men and rivers crooked.” – Unknown

“Honesty is the best policy. If I lose my honor, I lose myself.“ –William Shakespeare

“If you can’t be honest with yourself, you can’t fix yourself. Admitting you have a problem is the first step for a good reason.” – Ed Latimore

“Honesty is something you can’t wear out.” – Waylon Jennings

“Brutal, inner honesty… The three scariest words on the planet, and yet, at the same time, the very KEY that unlocks all the doors”. -Ken Dahl

“Pay what you owe and what you’re worth, you’ll know.” – Benjamin Franklin

“Honesty is perhaps just as important a factor in one’s communication skills as trust.“ -Ross Elkins

Whoever is careless with the truth in small matters cannot be trusted with important matters. ― Albert Einstein

“When a man is penalized for honesty he learns to lie.” – Criss Jami

“Avoid dishonest gain: no price Can recompence the pangs of vice.” – Benjamin Franklin

“You can fool people some of the time, but you can’t fool them all of the time.” – Aesop

“If you want to be trusted, be honest.” Unknown

“Before you can lie to another, you must first lie to yourself.” – Naval Ravikant

“When we are committed to honesty, we help reduce the level of misunderstanding, doubt, and fear throughout society.” – Dalai Lama

“An honest man in politics shines more there than he would elsewhere.“ Mark Twain

“It takes strength and courage to admit the truth.“ ― Rick Riordan

“When you walk a life of honesty, you live a life of truth.” – Therese Benedict

“Truth never damages a cause that is just.“ ― Mahatma Gandhi

“Honesty is often very hard. The truth is often painful. But the freedom it can bring is worth trying.” Fred Rogers

“A lie has speed, but truth has endurance.” – Edgar J. Moh

“Honesty is telling the truth to ourselves and others. Integrity is living that truth. Kenneth H.” Blanchard

“If you’re not honest with yourself, how can you be truly honest with anyone else?“ -Paul Williams

“Half the truth is often a whole lie.” – Benjamin Franklin

“The real source of inner joy is to remain truthful and honest.” 14th Dalai Lama

“The best thing about telling the truth is…you don’t have to remember what you said!.” – Unknown

“Honesty is more than not lying. It is truth telling, truth speaking, truth living, and truth loving.“ ― James E Faust

“Honesty is more than not lying. It is truth telling, truth speaking, truth living, and truth loving.”  ― James E Faust

“It is better to suffer for truth than to prosper by falsehood.” – Danish Proverb

“The sting of a reproach is the truth of it.” – Benjamin Franklin

“Honesty is the best policy – when there is money in it.” Mark Twain

“A lie gets halfway around the world before the truth has a chance to put its pants on.” Winston Churchill

“A man is never more truthful than when he acknowledges himself as a liar.” Mark Twain

“Pretty much all the honest truth-telling in the world is done by children.” Oliver Wendell

“People are like music, some speak the truth and others are just noise.” Bill Murray

“If honesty were suddenly introduced into American life, the whole system would collapse.” George Carlin

“It is hard to believe that a man is telling the truth when you know that you would lie if you were in his place.” Henry Louis Mencken

“He who is not sure of his memory, should not undertake the trade of lying.” Michel de Montaigne

“Honesty plus love will get you through most situations.” ” Naval Ravikant

“Love is honesty and mutual respect for one another.” – Simone Elkeles

“If in day-to-day life you lead a good life, honestly, with love, compassion, and less selfishness, then automatically you will find peace.” 14th Dalai Lama

“An honest person loves what is righteous and hates what is evil.”

“Of all the lies you can hear, “I love you” is the most painful one.”

“If I will be given a chance to turn back the time, I will go back to the time when I say the biggest lie of my life. And that is when I say I don’t love you anymore.”

“Man is least himself when he talks in his own person. Give him a mask, and he will tell you the truth.“ – Oscar Wilde

“All men profess honesty as long as they can. To believe all men honest would be folly and believe none so is something worse.“ – John Quincy Adams

“Honesty pays, but it doesn’t seem to pay enough to suit a lot of people.“ – Kin Hubbard

“To tell the truth is very difficult, and young people are rarely capable of it.”― Leo Tolstoy

“Honesty is the rarest wealth anyone can possess, and yet all the honesty in the world ain’t lawful tender for a loaf of bread.“ – Josh Billings

“Make yourself an honest man, and then you may be sure that there is one less scoundrel in the world.” – Thomas Carlyle

Be true to your work, your word, and your friend. – Henry David Thoreau

“Being honest may not get you a lot of friends but it’ll always get you the right ones.” – John Lennon

“you are the greatest fool in the history of Love if you couldn’t recognize an honest partner.” ― Srinivas Shenoy

“I fell in love with a liar and now I am miserable.”

Quotes About Honesty In Relationship

“Honesty is one of the most important parts of any marriage.” – Amanda Thompson

“We have no relationship without honesty. – by Claude”― Emily Giffin

“One honest relationship can be more productive than fistfuls of business cards.” – Susan Cain

“The establishment of any relationship, both individual and expert is honesty.” – Alexander Mejia

“While a relationship is typically dependent upon, both the boyfriend and girlfriend trusting each other as well as respecting and caring for one, another important factor that is vital in a successful relationship is honesty.” John Franks

“Often, too, with children, conformity, rather than honesty, is encouraged. I would like to see children feel free to express their emotions and, as they grow, learn how to control their impulses.” Magda Gerber

“All parents want their child to be honest but often forget to place emphasis on being trustworthy even though this is also a form of honesty.” James R. Morrison