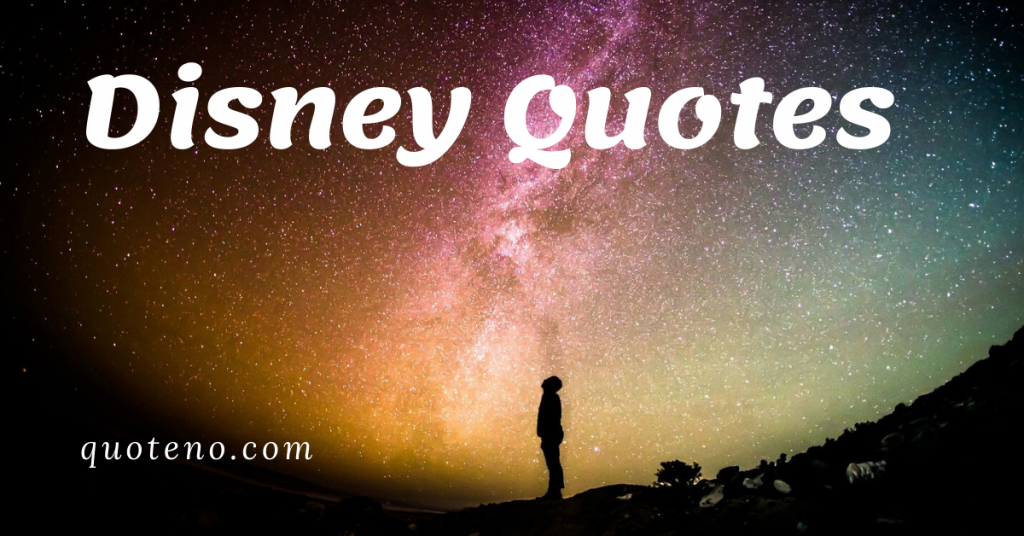 4. “Love is putting someone else’s needs before yours.”

5. “Remember you’re the one who can fill the world with sunshine.”

6. “The very things that hold you down are going to lift you up.”

7. “A true hero isn’t measured by the size of his strength, but by the strength of his heart.”

8. “I’d rather die tomorrow than live a hundred years without knowing you.”

— Piglet and Pooh (Winnie the Pooh)

10. “Life is a journey to be experienced, not a problem to be solved.”

11. “My dream wouldn’t be complete without you in it.”

— Tiana (The Princess and the Frog)

13. “If everybody got somebody by the hand, maybe everyone could learn and understand.”

14. “Every minute spent in your company becomes the new best moment of my life.”

— Laverne (The Hunchback of Notre Dame)

17. “You must not let anyone define your limits because of where you come from. Your only limit is your soul.”

18. “The very things that hold you down are going to lift you up.”

20. “Your library makes our small corner of the world feel big…”
― Belle (Beauty & The Beast)

21. Close your mouth, please, Michael. We are not a codfish.

22. “When will my reflection show who I am inside?”

24. “When you’re the best of friends having so much fun together, you’re not even aware you’re such a funny pair.”

— The Fox and the Hound

25.  “A little consideration, a little thought for others, makes all the difference.”

26. “Do not be followed by its commonplace appearance. Like so many things, it is not what is outside, but what is inside that counts.”

27. “I’m only brave when I have to be. Being brave doesn’t mean you go looking for trouble.”

28. “Always let your conscience be your guide.”

29. “Our fate lives within us. You only have to be brave enough to see it.”

—  Quasimodo (The Hunchback of Notre Dame)

— Jack Sparrow (Pirates of the Caribbean)

34. “Goodbye may seem forever. A farewell is like the end, but in my heart is the memory and there you will always be.”

Widow Tweed (The Fox and the Hound)

35.  “The only thing predictable about life is its unpredictability.”

36. “Here you leave today and enter the world of yesterday, tomorrow, and fantasy.”

37. If you don’t like Cinderella because she seems so “naive” and “weak,” listen to this quote from the Walt himself: “She believed in dreams, all right, but she also believed in doing something about them. When Prince Charming didn’t come along, she went over to the palace and got him.”

39.  “People often ask me if I know the secret of success and if I could tell others how to make their dreams come true. My answer is, you do it by working.”

40. “The way to get started is to quit talking and begin doing.”

41. “All our dreams can come true, if we have the courage to pursue them.”

44. “Laughter is timeless, imagination has no age, dreams are forever.”

45. “When you believe in a thing, believe in it all the way, implicitly and unquestionable.”

46. “Why worry? If you’ve done the very best you can, then worrying won’t make it any better.”

50. We did it Disneyland, in the knowledge that most of the people I talked to thought it would be a financial disaster – closed and forgotten within the first year.”

51. “Girls bored me – they still do. I love Mickey Mouse more than any woman I’ve ever known”

53. “All the adversity I’ve had in my life, all my troubles and obstacles, have strengthened me… You may not realize it when it happens, but a kick in the teeth may be the best thing in the world for you.”

54. “You can design and create, and build the most wonderful place in the world. But it takes people to make the dream a reality.”

55. “Movies can and do have tremendous influence in shaping young lives in the realm of entertainment towards the ideals and objectives of normal adulthood.”

56. “Our heritage and ideals, our code and standards – the things we live by and teach our children – are preserved or diminished by how freely we exchange ideas and feelings.”

57. “Times and conditions change so rapidly that we must keep our aim constantly focused on the future.”

58. “I always like to look on the optimistic side of life, but I am realistic enough to know that life is a complex matter.”

59. “Disneyland will never be completed. It will continue to grow as long as there is imagination left in the world.”

60. “Of all of our inventions for mass communication, pictures still speak the most universally understood language.”

62. “Mickey Mouse popped out of my mind onto a drawing pad 20 years ago on a train ride from Manhattan to Hollywood at a time when business fortunes of my brother Roy and myself were at lowest ebb and disaster seemed right around the corner”

63. “All cartoon characters and fables must be exaggeration, caricatures. It is the very nature of fantasy and fable.”

64. “Animation offers a medium of story telling and visual entertainment which can bring pleasure and information to people of all ages everywhere in the world.”

65. “When you’re curious, you find lots of interesting things to do.”

66. “I don’t like formal gardens. I like wild nature. It’s just the wilderness instinct in me, I guess.”

67. “Animation can explain whatever the mind of man can conceive. This facility makes it the most versatile and explicit means of communication yet devised for quick mass appreciation.”

68. “Of all the things I’ve done, the most vital is coordinating those who work with me and aiming their efforts at a certain goal.”

69. “Whenever I go on a ride, I’m always thinking of what’s wrong with the thing and how it can be improved.”

70. “A man should never neglect his family for business.”

72. “You’re dead if you aim only for kids. Adults are only kids grown up, anyway.”

74. “I would rather entertain and hope that people learned something than educate people and hope they were entertained.”

75. “When people laugh at Mickey Mouse, it’s because he’s so human; and that is the secret of his popularity.”

77. “Animation is different from other parts. Its language is the language of caricature. Our most difficult job was to develop the cartoon’s unnatural but seemingly natural anatomy for humans and animals.”

78. “Laughter is America’s most important export.”

79. “I have been up against tough competition all my life. I wouldn’t know how to get along without it.”

80. “Crowded classrooms and half-day sessions are a tragic waste of our greatest national resource — the minds of our children.”

81. “Disneyland is a work of love. We didn’t go into Disneyland just with the idea of making money.”

82. “I try to build a full personality for each of our cartoon characters — to make them personalities.”

83. “We did it — Disneyland, in the knowledge that most of the people I talked to thought it would be a financial disaster —closed and forgotten within the first year.

84. “There is more treasure in books than in all the pirate’s loot on Treasure Island.”

85. “We are not trying to entertain the critics. I’ll take my chances with the public.”

86.“Our fate lives within us; you only have to be brave enough to see it.” — Merida, Brave

87. “We believed in our idea — a family park where parents and children could have fun- together.”

88. “We have created characters and animated them in the dimension of depth, revealing through them to our perturbed world that the things we have in common far outnumber and outweigh those that divide us.”

89. “I never called my work an ‘art’. It’s part of show business, the business of building entertainment.”

91. “We allow no geniuses around our Studio.”

92. “It’s no secret that we were sticking just about every nickel we had on the chance that people would really be interested in something totally new and unique in the field of entertainment.”

93. “People still think of me as a cartoonist, but the only thing I lift a pen or pencil for these days is to sign a contract, a check, or an autograph.”

94. “There’s nothing funnier than the human animal.”

95. “Disneyland is the star, everything else is in the supporting role.”

96. “I’d say it’s been my biggest problem all my life… it’s money. It takes a lot of money to make these dreams come true.”

97. “I am not influenced by the techniques or fashions of any other motion picture company.”

98. “I have no use for people who throw their weight around as celebrities, or for those who fawn over you just because you are famous.”

99. “Laughter is timeless, imagination has no age, dreams are forever.”