Criticism quotes and sayings with images. If you are affected by the critiques of others in your life then these best quotes about criticism are for you to deal with haters. that will enlighten you.

Criticism starts with just scare words coming out of someone else’s mouth. Accepting criticism is very difficult and not anyone enjoys and seeks it out.

However, if you look at successful people and people who are often stuck, a main deciding factor is their willingness to listen to criticism and learn something from it.

You will face criticism at every step of your life when your direction toward success. This is a part of every life, success and carries. Sometimes it’s given with good intentions but communicated poorly.

All criticisms are not valid but some are surely valid. You need to Decide what applies and learn something from it and let the rest go. I hope these criticism quotes will help you to learn how to handle it and how it affects our lives.

“I criticize by creation, not by finding fault.” – Marcus Tullius Cicero

“Often those that criticize others reveal what he himself lacks.” — Shannon L. Alder

“You can’t let praise or criticism get to you. It’s a weakness to get caught up in either one.” – John Wooden

“A creative life cannot be sustained by approval any more than it can be destroyed by criticism.” ― Will Self

“Any fool can criticize, condemn and complain and most fools do.” – Benjamin Franklin 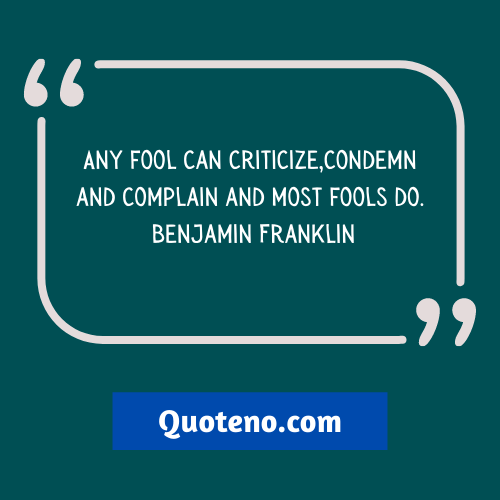 “If we had no faults we should not take so much pleasure in noting those of others.” ― François

“Pay no attention to what the critics say. A statue has never been erected in honor of a critic.” -Jean Sibelius

“People ask you for criticism, but they only want praise.” ― W. Somerset Maugham

“The final proof of greatness lies in being able to endure criticism without resentment.” -Elbert Hubbard

“Criticism, like rain, should be gentle enough to nourish a man’s growth without destroying his roots.” – Frank A.Clark

“The dread of criticism is the death of genius.” — William Gilmore Simms

“Any fool can criticize, condemn, and complain but it takes character and self-control to be understanding and forgiving.” – Dale Carnegie

I pay no attention whatsoever to anybody’s praise or blame. I simply follow my own feelings. – Wolfgang Amadeus

“The trouble with most of us is that we’d rather be ruined by praise than saved by criticism.” ― Norman Vincent Peale

“When we judge or criticize another person, it says nothing about that person; it merely says something about our own need to be critical.”

“There is only one way to avoid criticism: do nothing, say nothing, and be nothing.” — Aristotle

“Criticism is an indirect form of self-boasting.” – Emmet Fox 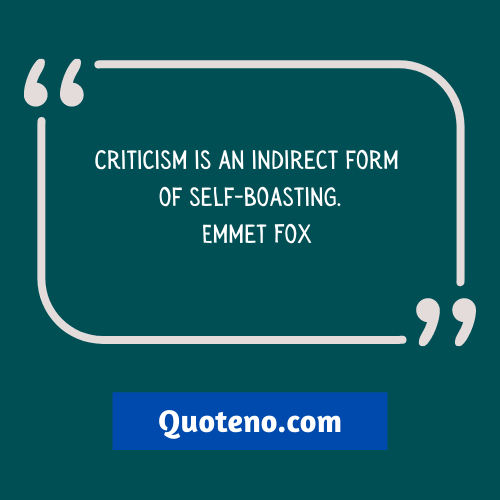 “You can’t let praise or criticism get to you. It’s a weakness to get caught up in either one.”

“The critic’s symbol should be the tumble-bug: he deposits his egg in somebody else’s dung, otherwise he could not hatch it”

It is much more valuable to look for strength in others. You can gain nothing by criticizing their imperfections. – Daisaku Ikeda

“Do what you feel in your heart to be right. You’ll be criticized anyway.”

“The motive behind criticism often determines its validity. Those who care criticize where necessary. Those who envy criticize the moment they think that they have found a weak spot.” — Criss Jami

“Criticism should not be querulous and wasting, all knife and root-puller, but guiding, instructive, inspiring.”

“Criticism of others is futile and if you indulge in it often you should be warned that it can be fatal to your career.”

“Of course you’re always at liberty to judge the critic. Judge people as critics, however, and you’ll condemn them all!”

“Interpretation is the revenge of the intellectual upon art.” – Susan Sontag

“Don’t waste your energy trying to change opinions…Do your thing, and don’t care if they like it.” — Tina Fey 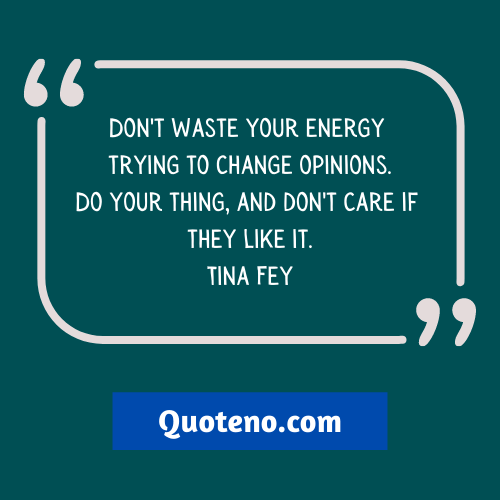 “If we judge ourselves only by our aspirations and everyone else only by their conduct, we shall soon reach a very false conclusion.” – Calvin Coolidge

“In criticism, I will be bold, and as sternly, absolutely just with friend and foe. From this purpose, nothing shall turn me.”

“When we speak of the evil of others, we generally condemn ourselves.” – Publius Syrus

“I am bound by my own definition of criticism: a disinterested endeavor to learn and propagate the best that is known and thought in the world.”

“I do not resent criticism, even when, for the sake of emphasis, it parts for the time with reality.”

“Don’t be distracted by criticism. Remember, the only taste of success some people have is when they take a bite out of you.” – Zig Ziglar

“One mustn’t criticize other people on grounds where he can’t stand perpendicular himself.” – Mark Twain

“A critic is a legless man who teaches running.” – Channing Pollock

“The final proof of greatness lies in being able to endure criticism without resentment.” — Elbert Hubbard

“It is easier to be critical than correct.”

“Some people talk about other people’s failures with so much pleasure that you would swear they are talking about their own successes.” — Mokokoma Mokhonoana

“Conventional people are roused to fury by departure from convention, largely because they regard such departure as a criticism of themselves.”

“Before you criticize a man, walk a mile in his shoes. That way, when you do criticize him, you’ll be a mile away and have his shoes.”

I hope you like these criticism quotes. if you also face self or destructive criticism in your daily routine in the office from your boss, coworkers, and loved ones then take it the positive way. 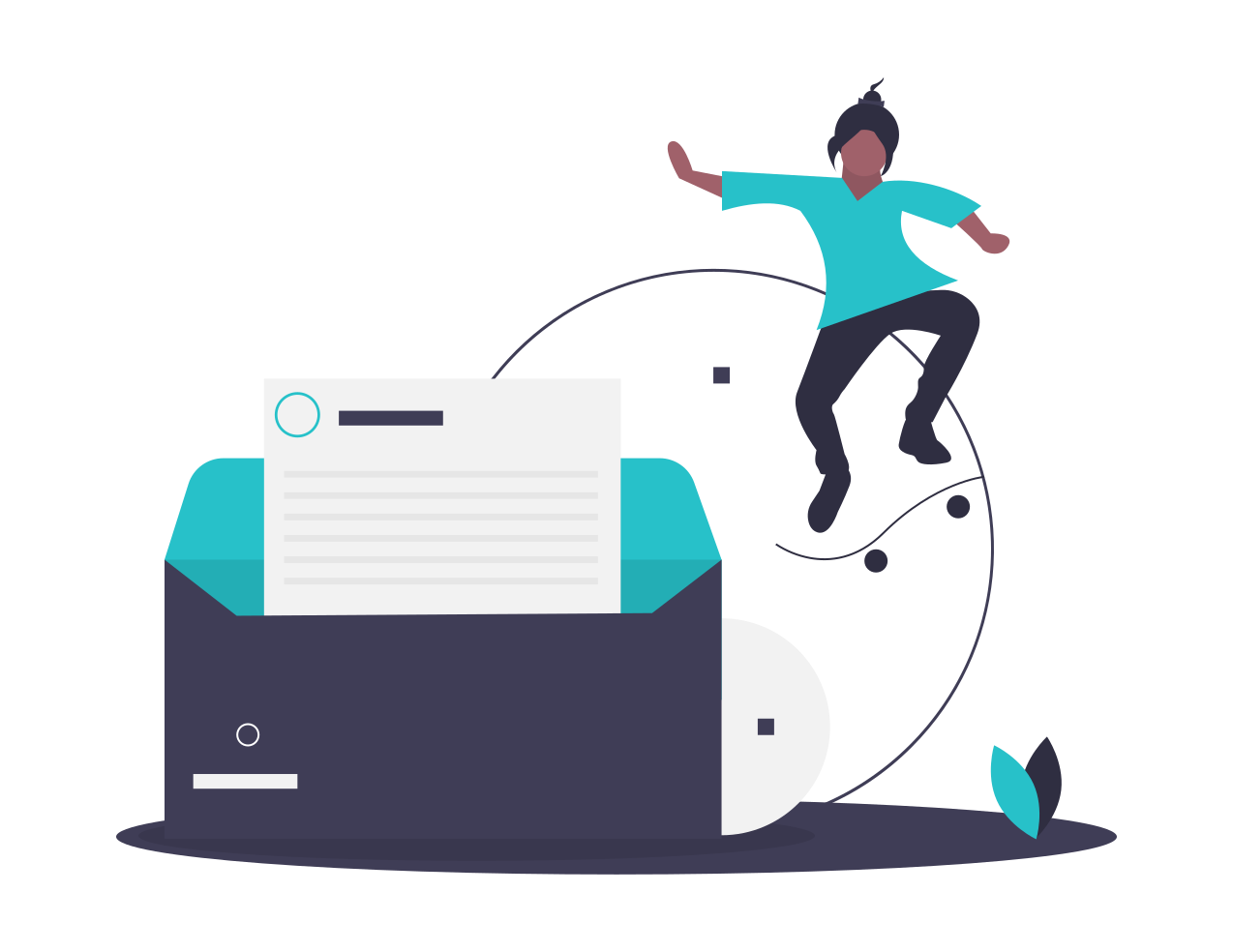